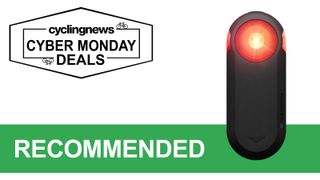 Garmin's Varia Radar RTL510 rear bike light has seen its price almost halved for Cyber Monday, with Chain Reaction Cycles cutting the retail price by 41 per cent on this weekend of deals. Over in the USA, Walmart have also cut the price on the light by 25%.

The light puts out both visual and audio alerts for vehicles approaching your bike from behind, as well as warning you about approaching vehicles from up to 153 metres away.

The Radar name partly comes from an on-screen display that shows moving dots to indicate approaching vehicles on a paired Garmin cycling computer. The light itself comes with 220-degree visibility, as well as claimed visibility from a mile away thanks to its 20 (solid night), 29 (flash night) or 69 (day flash) lumens of brightness.

It's easy to mount and has a six-hour battery life in solid mode (15 hours in flashing mode), meaning you'll be served for the majority of your training rides this winter. For the safety-minded cyclist – hopefully everybody – the Garmin Varia Radar RTL510 rear bike light is a great option this Cyber Monday.

If you're looking for more great deals for Cyber Monday, then check out our Cyber Monday bike deals. There's everything from bikes to trainers to helmets, clothing and much more, all at big price drops.