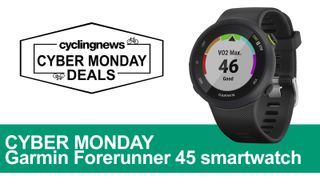 This Cyber Monday Garmin deal outperforms the Black Friday deal covered last week. The Garmin Forerunner 45 is now available in a Cyber Monday deal at Amazon - in black colourway only - for the best price ever recorded on the retail giant's site. Formerly £169.99, the cycling-friendly smartwatch is now available at just £124.99.

Garmin Forerunner 45 smartwatch | 26% off at Amazon
Was £169.99 | Now £124.99
The Garmin Forerunner is at its lowest price at Amazon in this Cyber Monday deal. We're confident this price won't be beaten. Perfect for multisport athletes and cycling purists alike. View Deal

If you're a cyclist, you'll have heard of Garmin. Popular for its Edge series GPS computers, the tech giant also has a long list of smartwatch models in its range. The Forerunner 45 is one of those, and while smartwatches are wider-adopted by triathletes and runners, they offer benefits for pure cyclists too, both on and off the bike. Especially now you can pick up the Forerunner 45 smartwatch in a great Cyber Monday cycling deal.

The Forerunner 45 is already a valuable prospect with its lightweight design and range of useful features such as GPS tracking, automatic uploads to Garmin Connect, and performance metrics such as heart rate or VO2 Max.

The Black Friday and Cyber Monday cycling sales have furnished us with endless deals on great cycling products, so check out our breakdown of the best Cyber Monday bike deals to find the best deals available now.