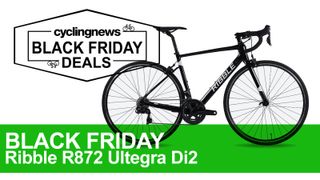 British-based bike brand Ribble has cut the price of their entry-level carbon race bike, the R872, by 31 per cent as part of their Black Friday deals. For £1599.00 - down from £2199.99 - you can get your hands on a sleek carbon road bike with a full Shimano Ultegra Di2 electronic groupset.

That means that the Di2 Black Friday deal is a mere £300 more than the Shimano 105 version of the bike, a bargain if ever we've seen one.

The R872's lightweight carbon frame is shaped to a 'sportive' geometry, making it a versatile bike perfect for long training rides and commutes alike. It's a handcrafted bike that combines high-end performance with a relaxed geometry, says Ribble.

Changes from the previous R872 include an oversized downtube, dropped seat stays, aero forks, lengthened chain stays and enhanced tyre clearance. All these factors provide added stability and comfort for those long days in the saddle, while retaining the stiffness and handling ability of a race bike.

Then there's the Ultegra Di2 groupset, which retails for 2/3 the price of this bike on its own. Among the leading groupsets out there, the Ultegra Di2 is just about as good as it gets for shifting performance, and its inclusion on such an affordably priced bike only makes this deal sweeter.