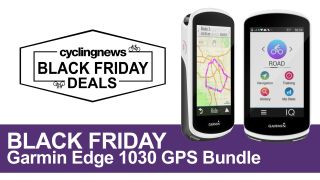 Among the world's leading brands in GPS technology, Garmin's flagship Edge 1030 is one of the most feature-rich cycling computers available on the market today. It's a bit of a treat, then, that both Wiggle and Walmart have cut the price on the Edge 1030 bundle for Black Friday, by 18% and 23% respectively.

The bundle includes a heart rate monitor, speed and cadence sensors as well as a handlebar mount. The main attraction, though, the computer itself, features a  3.5-inch colour screen, performance metrics and, of course, GPS route tracking.

Garmin Edge 1030 cycling computer bundle | 23% off at Walmart
Was $699.99 | Now $535.60
In the USA, Walmart is offering a great deal on the Garmin Edge 1030 bundle. They've sliced more off the price than Wiggle, making the saving on this computer even bigger!View Deal

Garmin Edge 1030 cycling computer bundle | 18% off at Wiggle
Was £549.99 | Now £449.00
For those outside the USA, Wiggle has cut 18 per cent off the price of Garmin's top-of-the-range cycling computer for Cyber Monday. Grab this great riding companion now before it's too late!View Deal

As we mentioned, the Edge 1030 features a 3.5-inch colout screen, and you can view every metric you're ever likely to need on that screen – from route planning maps to elevation data and the all-important plethora of time, distance, heart rate, power data and more besides.

In conjunction with apps such as Strava or TrainingPeaks, it's easy to plan training rides with the Edge 1030. The touchscreen makes it easy to navigate through the computer, and there's a functionality to communicate with fellow Edge 1030 users through the computer, as well as a feature that alerts you to missed phone calls or text messages.

Don't worry though, because if all that doesn't sound right for you, then we've got more cycling computer deals on our dedicated Cyber Monday cycling deals hub page. There's far more besides that too, from bikes to trainers, clothing and more.