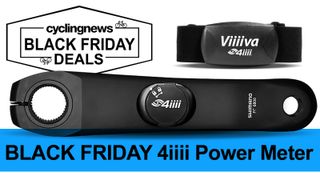 Tipping the scales at just 9g (battery included), the 4iiii Precision is a power meter for the weight weenie. It's a single side crank-based power meter and is accurate to a maximum deviation of only one per cent.

Thanks to ProBikeKit and their Cyber Monday sales, it is now available at just £245.00, plus you will also receive a free heart-rate monitor with any 4iiii Power meter worth £79.99.

4iiii says it measures 'tri-axial strain' on your crank arm with its patent-pending 3D technology. Like the Stages Cycling Power meter, it's powered by a CR2032 coin cell battery that's claimed to offer around 200-hours of ride time.

Broadcasting in both Bluetooth and ANT+, the 4iiii Precision can talk to most head units and training software such as Zwift or TrainerRoad. There is also a companion app for easy calibration and over-the-air firmware updates.

Stages Cycling's left-sided power meter is the closest competitor to the 4iiii Precision. While 4iiii claims to be half a per cent more accurate and the strain gauge is 11g lighter, the battery life is said to be about half.

The Stages deal also seems to have more crank arm length availability, the 4iiii deal here is for the older - yet equally compatible - Ultegra 6800 crank, and it's only available in 165mm or 172.5mm. We featured the 4iii Precision dual power meter in our round of the best power meters earlier in the year.