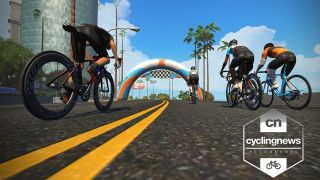 Wondering how you’re going to stay fit during the coronavirus lockdown? Well, many of us have been pedalling away in the basement for some time now thanks to the marked improvement of the best turbo trainers and latest crop of indoor cycling apps. These apps have been largely responsible for transforming indoor riding from the most universally hated part of cycling to one of its fastest-growing sectors.

Now we have catalogues of indoor cycling workouts written by coaches we otherwise wouldn't have access to, vast digital worlds to explore and even competitive e-racing and group rides. When used in collaboration with a smart trainer, modern training apps can provide a truly immersive experience — and you'll get faster and stronger along the way. So regardless of lockdowns and restrictions, indoor cycling apps can help you stay race-fit and ready-to-ride as soon as it's safe to.

A search of the app store will reveal an ever-growing list of training apps; scroll down for the apps the Cyclingnews team have downloaded on our devices, or jump to the bottom for everything you need to know.

Though Zwift wasn't the first to offer virtual riding, it introduced the social aspect and in Wattopia you can chat with and even draft off of your riding mates. The interactive training video game allows you to customise your avatar — the more you ride, the cooler your bike and kit can be as you ride through six worlds with 80+ routes available.

Whether you’re after a lung-busting race, a mellow group ride, an interval workout or just want to check out the seemingly endless miles of tarmac, gravel and cobblestones, Zwift has it all.

Check out our full guide to Zwift.

No fluff app with a massive catalogue of workout

TrainerRoad was the first to offer app-based FTP training and their no-frills approach is committed to making you faster. With a training catalogue of over 2,000 workouts, you can pick and choose individual sessions or follow one of coach Chad's plans. These can be customised using the new Plan Builder where workouts or entire training blocks can be moved around based on vacations, illness or just time off the bike.

Inside the app a blue bar graph shows you what's coming up, your targets are displayed in big fonts and text cues explain why you’re doing these efforts while providing reminders about things like relaxing your shoulders and breathing with your stomach. There is also a 'minimal' window mode which shrinks the interfaces down into a strip on the lower portion of your desktop so you can watch Netflix on the same screen. It's wholly functional from the smartphone app, and the same hide-and-watch-Netflix approach works here too.

TrainerRoad also offers just about all of its workouts with a 'Do Outside' option, which can be synced automatically to your head unit.

View The Sufferfest
High-quality workouts and training plans designed by top-level coaches
Strength training, yoga and mental training all-in-one
Videos can get a bit tired once you have watched them a zillion times

The Sufferfest started as a series of single download videos that founder David McQuillen stitched together in his free time. Using UCI race footage, he'd add music and create a storyline with a bit of humour sprinkled throughout; the videos would guide you through basic interval workouts based on perceived effort. A few years on, The Sufferfest is a full training suite offering cycling, running, strength and mental training along with yoga sessions. The app will also compile everything into an easy-to-follow training plan.

Most training apps base their intervals off FTP. However, The Sufferfest takes it a step further using what it calls 4DP which takes into account your neuromuscular, anaerobic capacity and threshold to better tailor workouts to your physiology. Instead of the classic 20min threshold test, The Sufferfest uses a fitness test it calls Full Frontal, developed by Neal Henderson (who has coached the likes of Rohan Dennis and Evelyn Stevens), to test these suprathreshold values. Once tested they are automatically applied to all the workouts in The Sufferfest catalogue.

For the duration of the COVID-19 pandemic, The Sufferfest is offering four-week training plans. There's also a free month's subscription using code ALLINSUFPLAN.

FulGaz's motto is less virtual, more reality and that's precisely what this app offers. Using real ride footage and some pretty advanced physics modelling, FulGaz not only tailors resistance based on what's happening on screen, but the footage itself will react to your effort.

With 4k footage filmed from the handlebars, the app uses real elevation data to control the smart trainer to match what you see on the screen, also taking into account your weight and power to adjust the speed of the footage. At the time of writing, there are 596 routes ranging from the infamous Alpe D'Huez, to Sunshine Canyon outside Boulder Colorado. FulGaz has also recently added a workout library and the ability to import custom sessions from TrainingPeaks or Today's Plan.

The app with a bit of everything to offer, without the price tag

If you're looking for a bit of real riding footage, with some virtual racing and structured workouts too, Rouvy might be the app subscription for you. Formerly known as Cyclops Virtual training, Rouvy has a sizeable catalogue of outdoor routes from around the world, all of which control the trainer to imitate what you see on the screen.

The Czech outfit has also been working on augmented reality which superimposes avatars on top of the real footage, allowing you to ride with virtual partners as well as join group rides and races with real riders from around the world. Also included with the subscription is a catalogue of 4,000 workouts featuring interactive video guides along with a custom workout builder too. Rouvy also offers one of the cheapest subscriptions at US$10 per month.

Road Grand Tours is the latest entry into the indoor training space aiming to offer a Gran Turismo-esque, ultra-realistic experience to your indoor training. While comparisons to Zwift are to be expected, Road Grand Tours has improved graphics and accurate recreations of drafting, cornering and braking integrated into the gameplay.

Inside the app, Road Grand Tours takes riders to 3D representations of real places like Mout Ventoux and the Patterberg. For the time being, there are only eight 'Real Roads' but the app can create 'Magic Roads' based on any GPX file. An online game wouldn't be an online game without competitors and you can join rides and races, chase in-game Strava Segments and interact with riders around you on the road. Road Grand Tours offers a tiered subscription model, offering access to real roads and access events for free.

For the duration of the COVID-19 pandemic, Road Grand Tours is offering access to its app for free.

Brings the outdoors into your basement

For quite some time, BKool made some pretty unique indoor trainers while also pushing hard into software. With the smart trainer market becoming ever more competitive, the Spanish outfit has decided to shift its focus entirely towards creating the best indoor cycling apps.

The BKool Cycling app offers four types of sessions; Route, Workout, Velodrome and of course, FTP test. Similar to the other apps which offer ‘real rides’, the resistance is tailored to match what you see on the screen and the faster you pedal, the faster the footage plays, emulating a real-life ride. You can choose to either ride in the first-person view, with a 3D avatar or even a map view if that tips your fancy. With a camera and a GPX file, you can make your own smart enabled routes, with the app replicating real-world riding conditions in the digital version.

With the option to ride with an avatar, BKool is also adding the social aspect, introducing leagues and challenges that run throughout the year.

While it's a little different to the apps above because the bike itself is a prerequisite, Peloton has brought indoor training to the masses. When you get set up with the bike, the Peloton app has 4,000 pre-recorded spin classes raining from 20-90min in length and run by professional spin instructors — though former pro's like George Hincapie and Christian Vande Velde have dropped in to teach a class or two.

There are live classes where you can follow and chat with other people who are suffering alongside you, and there are scenic rides too if you just want to spin your legs out.

How to choose an indoor cycling app

All training apps use power to determine how fast you're moving through a virtual world or to dictate intervals. There are three ways these apps can determine power; a smart trainer, a power meter, or virtual power.

The first two are relatively self-explanatory; smart trainers and power meters will connect to your device with a Bluetooth or ANT+ connection (you may need an ANT+ dongle for the latter) and the app will be able to glean how many watts you're pushing.

If the centrepiece of your pain cave is a 'dumb' trainer, you don't have to go out and drop a week's pay on a power meter or a turbo with electronics inside to use a training app, but you will need a speed and cadence sensor.

Every trainer has a unique power curve, and thanks to the folks at TrainerRoad, using this resistance curve, we know how to generate a power estimate based on speed and cadence. There are some caveats to virtual power, namely, the accuracy hinges on whether your respective app has tested a specific trainer. Virtual power also won't be as accurate as the highly tuned strain gauges in a power meter or smart trainer, but are within the ballpark to get you started with a training app.

Before you fork over your credit card details for an app subscription, it's essential to double-check that it's compatible with the platform you plan to run it on. For the most part, every app works on your computer and iOS, but a few are still lagging on Android versions while others are adding Apple TV to their repertoire.

3. What are you looking to accomplish?

Are you looking to ride, race, socialise and explore roads around the world or are you prepping for an event and looking for highly specific intervals?

There are plenty of apps that do all of the above, however, in the same way that tools in a multi-tool aren't the same quality as dedicated workshop tools, the apps that are explicitly designed for interval workouts offer a better experience than those where it's not the main focus. This works in the other direction too, the apps that are designed around a social experience do this better than apps which added the feature later.

But no matter which app you use, you will only get faster and stronger provided you actually use it.

FTP stands for Functional Threshold Power and is the highest average power you can hold for an hour.

This figure is primarily seen as the gold standard when it comes to estimating your fitness level, and every training app has adopted some form of FTP to set workout intensities. With that, each app will either have some definition of an FTP or ramp test in its catalogue to guide you through the test and calculate your threshold at the end.

Back to the top