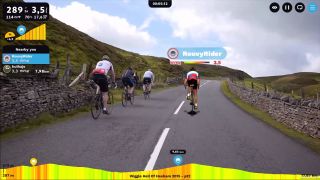 What is Rouvy and how does it work?

It’s a virtual training world brought to you by some very committed cyclists and developers, from the Czech Republic.

Founded by Petr Samek, a keen cyclist and software engineer, Rouvy differentiates itself from other virtual trainers in two ways: prize money and the sheer scale of routes.

Although it is designed and marketed as an indoor training tool, the racing element has very real incentives, including $10,000 in prizes annually.

Rouvy uses real-world video footage of routes which has allowed them to build a large library of iconic riding locations to try out. Rouvy’s visual appeal is enhanced by calibrated video smoothing software, which is overlayed with players avatars. Rouvy is also capable of streaming its virtual cycling worlds in 4K, if you have a screen of that resolution.

How much is Rouvy?

The monthly subscription fee is $10. You can undergo a 14-day free trial period, to familiarise yourself with all the features and ensure that Rouvy is everything that you wish for it to be, as your virtual training platform.

How to get started

This is perhaps the easiest of all virtual cycling apps to use, graded in terms of set-up convenience. Programmed to provide a click-and-ride experience if you have a smart trainer or power meter connected kit, Rouvy’s initial user experience is seamless.

Select your appropriate device type and download the app specified for it. Navigate into the settings menu and select your trainer. It’s really that simple.

What equipment do I need?

The screen requirements are like most other virtual trainers: iOS, Mac, Windows, Android or Apple TV.

If you only have access to a simpler turbo-type trainer, without digital integration, the realism of resistance and effort is going to be lost. With your road bike on rollers or on a non-smart trainer, you’ll still be able to enjoy the graphic elements of Rouvy, but without the power resistance features. You’ll also need an intermediate receiver to piggyback the ANT+ or Bluetooth signalling.

If you have a power meter connected, either on your bike or part of your trainer, Rouvy will calculate your virtual speed. This takes into account factors usually experienced when riding outside, like wind resistance, and uses an average approximate figure to correct your moving speed in-game.

Smart trainers work best, with Rouvy able to create exact resistance profiles using your bike’s electromechanics. This automatic power resistance is what indoor training in 2020 is all about. Rouvy supports a huge diversity of nearly 50 smart bikes and indoor trainers.

All the courses and rides

There are 7000km of possible routes and Rouvy’s software has an ability to really leverage the input and scale of its riding community. GoPro footage, GPS computer data and real world digital mapping allows Rouvy to blend credible realism into its vast 2D virtual worlds.

Rouvy offers no fewer than 70 iconic rides, including some of cycling’s most celebrated passes: Stelvio, Sella and Gavia. The Ironman Kona course is also in the offering. There are also Alpine and Pyrenean routes too and an impressive variety of UK-specific cycling terrain and events.

Dashing amateurs can even choose to race a very accurate 1:1 scale version of the Tour de Suisse

If you have a GPS logged personal route, you can upload it as a GPX file and Rouvy will recreate it for you to ride digitally.

Most of the famous real roads can be ridden in avatar mode, whilst the other routes are ridden in a POV format.

Rouvy offers up to $20,000 of prizes as an incentive to race and conquer challenges within the game. These races are partnered by the likes of Elite and Wahoo, who supply the prizes and a real world racing appeal for those who thrive on outright competition.

As training or group riding tool, there are ample features beyond the pure racing structure. Rouvy claims to have no fewer than 6,000 structured workouts and there is an official daily TrainingPeaks workout too. Adding credence to its multisport cycling appeal, Rouvy has been chosen as the official virtual training partner for Ironman.

Training zones can also be programmed into Rouvy. It allows you to enter your maximum heart rate and FTP values, including body proportions, which Rouvy then uses to autonomously select appropriate training zones when required on your rides.