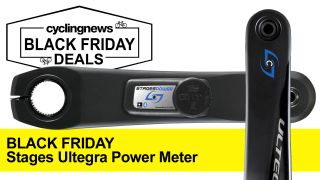 When Stages launched its non-drive side crank-based power meters, the price point fell well below its competitors, making power training more accessible to the masses.

If you're keen to know exactly how many watts you're pushing up your favourite climb or during the local weekend crit, there are Black Friday deals to be had on the crank-based power meter.

Utilizing a strain gauge bonded to the left crank arm, the Stages Power meter is claimed to offer +/-1.5-percent accuracy and only adds 20g. It's powered by a standard CR2032 coin cell battery which will last about 200-hours in use and doesn't need to be sent away or require any tools when the battery runs flat.

The Stages Power Meter was one of the first to offer dual-band ANT+ and Bluetooth compatibility and to utilize an accelerometer to measure cadence rather than a magnet glued to the frame. Stages also has a handy companion app for faff-free calibration and firmware updates.

At launch, Stages power meters were only compatible with alloy crank arms because carbon doesn't deflect linearly, meaning it's tough to measure watts with a strain gauge - they have since figured out how to measure accurately from carbon cranks. There is also a competitor in the market, with 4iiii offering its left side crank-based power meter - which is also on sale this Cyber Monday, although crank length options are limited.

Given the power meter itself only weighs a handful of grams, the Stages Power Meter is one of the lightest on the market. Provided you match the power meter crank length with your drive-side crank, the only thing you need to worry about is frame compatibility, although most of the frame clearance issues have been solved with the third generation strain gauge.

Black Friday and Cyber Monday have loads of deals on great cycling gear at some unmissable prices. Be sure to have a look at our roundup of the best Cyber Monday Cycling deals for even more discounts.