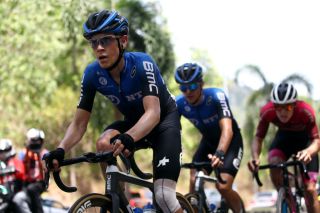 Louis Meintjes won the final men's race of the Tour for All on the Zwift virtual platform, leading the NTT Pro Cycling team to overall victory in the points-based general classification.

Meintjes has not won on the road for five years after a series of injuries and problems but used his strength to weight ratio to make a difference on the 12.2km L'Alpe du Zwift climb.

He joined Freddy Ovett (Israel Start-Up Nation) and Louis Vervaeke (Alpecin-Fenix) in an early attack with 10km left to climb, showing his intentions. The effort blew apart the peloton and lead to Adam Yates going off the back, the altitude of Andorra making it difficult for him to be competitive. Rigoberto Uran (EF Pro Cycling) also suffered at altitude in Colombia but tried to hang on before cracking.

Piccoli got across to the trio up front and then soon pushed alone in search of a second Tour for All victory. He was joined by Lucas Hamilton (Mitchelton-Scott) with three kilometres to go but the big-name chase group was never far behind the talented young Australian in what was an intense race. Hamilton used a power-up to open a gap but was eventually pulled back by Meintjes and the others as the flame rouge neared. Meintjes then attacked, putting out 7.5 W/kg and using his Breakaway Burrito power-up to open a gap and go clear.

Hamilton got back up to him but then Meintjes kicked again, to win by less than a second.

Stefan de Bod gave NTT Pro Cycling a second spot on the podium and further points, securing their overall victory. NTT Pro Cycling scored a total of 397 points, with Mitchelton-Scott a distant second with 241 points and Alpecin-Fenix third with 239 points.

"It's hard to look behind you on Zwift but I knew Stefan might have a better sprint, so I thought I'd go early and he could sit in the back and come from behind and finish it off," Meintjes said, revealing his plan and emotion s to be back racing after several weeks in lockdown.

"It's been frustrating but the team has been keeping us competitive and I've enjoyed this racing. I was prepping like for a normal race, going all nervous before the start and going through my normal race route. It's something to keep you busy and make you feel like a professional bike racer."