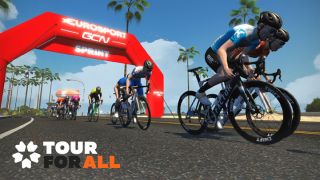 Michael Gogl (NTT Pro Cycling) and his cave of pain came out on top in the second Zwift for All virtual race on Tuesday. The Austrian came from behind to beat Greg Van Avermaet (CCC Team) and Matthieu van der Poel (Alpecin Fenix) after Gogl’s teammate Michael Valgren was caught inside the final few hundred meters.

The result ensured that NTT won the race on points, ahead of Van der Poel’s Pro Continental outfit.

“It was a really tough start and was full gas from the beginning,” Gogl said.

"This is my first Zwift race, I did a stage of Tour de Suisse (Digital Swiss 5 on Rouvy - ed). I was impressed with how hard it was. We were really good also with Michael Valgren. He was pushing it up in the front and I could save myself for the final sprint."

The race was held on the UCI World Championships course from Richmond in 2015. Five years ago it was Peter Sagan who stole the show but the Bora rider isn’t competing as part of this series. Instead, a host of big names lined up, with James Whelan from EF Education First one of the first to attack and try and split the field.

A series of attacks reduced to the bunch to around 20 brave avatars before Van der Poel stretched his legs with 19km to go as he began to create the key split of the race. The Dutchman held a pace of around 450 watts. Normally those sorts of numbers would be enough to power a refrigerator or maybe a small blender, but the Alpecin rider was in no mood for mixing with the rest of the front group as he opened up a slender leader.

On the penultimate lap, with the three classified climbs packed into the final sectors, Craddock and Valgren made their move before there was a reforming that included most of the riders from the first and second groups. One the final lap Van der Poel made yet another move with 9km remaining but he was soon overhauled by Valgren.

The Danish rider, who has won Amstel Gold Race, established a lead of 13 seconds but that advantage quickly evaporated every time the road began to climb.

Valgren dug deep but his rivals were closing fast as they crested the final, and with the road to the line still holding a slight incline Valgren was quickly overtaken. It looked as though Van Avermaet and Van der Poel would contest the sprint but it was Gogl who had the most powerful finish to win by well over a second.

Valgren was forced to settle for fifth but NTT took a well-deserved team win.