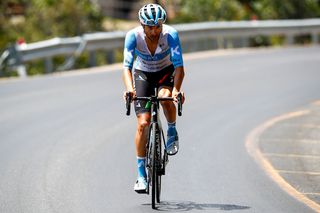 James Piccoli (Israel Start-Up Nation) won race three of the Tour for All virtual race on the Zwift platform, using a late power-up to surge away and win alone on the Watopia circuit climb.

The Canadian stayed in the peloton during the early racing as NTT Pro Cycling tried to dominate the racing. When Pello Bilbao (Bahrain McLaren) was caught, Piccoli marked Domenico Pozzovivo (NTT Pro Cycling) and then surged away, producing 9.5 watts per kilometre for the final 500m of the 72.9km race.

Rudy Molard (Groupama-FDJ) finished 2.7 seconds behind Piccoli, with his teammate Valentin Madouas third at 6.2 seconds. Stefan De Bod was NTT Pro Cycling's best finisher in eighth but the team topped the day's team standings with a total of 71 points. NTT Pro Cycling still lead the overall points classification with 214 points. Alpecin-Fenix is second with 167 points and Israel Start-Up Nation are up to third with 163 points.

NTT Pro Cycling sent riders on the attack during the race in pursuit of points. Nic Dlamini scored some early points and then Victor Campenaerts and Gino Mäder joined forces to attack the peloton on the rolling roads. De Bod came across just before a key sprint. He was beaten by Madouas but scored four points for second place.

As the pace eased after the sprint, with 20km to go, Bilbao attacked and gradually opened a 48-secod gap. He seemed on track for victory but suffered when the Watopia climb began to bite and was swept up with two kilometres to go.

The gamification of the Zwift platform came into play in the surge to the line, with veteran climber Domenico Pozzovivo using a Breakaway Burrito to stop his rivals drafting behind him. Piccoli played his tactics a little later, using a Feather Lightweight power-up to reduce his weight by 9.5kg for 15 seconds. That allowed him to put out close to 9.5 watts per kilogramme for the final surge to the line and so win alone.

"I saved a featherweight power-up for the last couple of hundred metres. We knew that it was going to be steep to the line, so I figured if I could hang on the downhill and recovered a little bit and use that for when it counted, with a long sprint, I'd have a good chance," Piccoli said post-race from his home in Montreal, Canada, revealing his and Israel Start-Up Nation''s Zwift skills.

"We have a lot of experience on Zwift, we do some Medical Aid rides and so the whole team has been riding a lot. We've came super prepared and it's nice to get a win, even if it’s a virtual one."

Piccoli stepped up to WorldTour level in 2020 after four successful seasons on the North America racing circuit with Elevate-KHS. He is fortunate to be able to train outdoors in Canada and has also been fundraising for the COVID-19 pandemic with the Israel Start-Up Nation team on Zwift and outdoors.

"On Israel Cycling Nation we're super, super lucky. The team has been supportive through all of this; we're sticking together, keeping our heads high and I love to my ride my bike anyway, so I'm living the dream right now by getting to ride my bike all day," Piccoli said.

"I'm lucky to be somewhere where we can ride outside, so I've been training well and having fun. I'm really excited to get back racing if it happens.

"Team ISN started a medical aid ride to raise funds to secure masks for hospitals. I was so inspired that I did an epic ride of my own last Saturday. I did my local climb 100 times, to try to raise funds and medical supplies for retirement facilities and homeless shelters in Montreal. We raised almost 20,00 dollars to date, which is really cool."