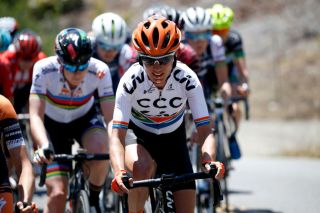 Ashleigh Moolman-Pasio won the final stage of the Zwift Tour for All, reaching the finish atop L'Alpe du Zwift alone after a huge effort from the foot of the climb. It was her third win in the five-race series.

The South African revealed she has set a new record on the Rocacorba climb near her home in Girona, Spain after the strict lockdown ended and she showed her climbing ability on the L'Alpe du Zwift by pushing out close to 300 watts.

Moolan-Pasio used her power to gradually opened a gap on Kiwi Ella Harris (Canyon-SRAM) and was able to celebrate a hugely successful week of virtual racing. Harris fought all the way to the line, finishing 48 seconds back.

Team Tibco-Silicon Valley scored a total of 391 points across the five races to win the series classification. Canyon-Sram was second 359 points and CCC-Liv was third with 314 points.

Boels-Dolmans was fourth overall with 157 points but Anna van der Breggen was well down the results today, with Zwift experience and the gamification of the virtual platform important for success as fitness and outdoor road racing ability.

On Thursday Moolman Pasio described herself as a "real deal authentic Zwift convert", explaining she had initially turned her nose up at the idea of riding a static bike.

"I had a bit of a mental block towards it. I thought ‘why would I ever need to use that?’ I live in the cycling paradise of Girona," she said. "But when the lockdown hit, I decided I could make my life miserable dwelling on what I don’t have access to, or I could embrace it and try and work on my weakness and make the most of it."

However her hard work paid off on Friday.

"It was a tough stage, 1,700 metres of climbing in 46km is quite a big day in the saddle but I really enjoyed it," Moolman-Pasio explained post-race.

"I have a bit of a reputation for being a little impatient and I think it shows even more on Zwift. But I know that on Zwift the algorithm favours attacks on the steepest parts and so when the gradient went up, that's when I get out of the saddle in real life because I can make the difference.

"It was a tough day but I've done a lot of training on Zwift during the lockdown and I'm used to doing the intervals on it."