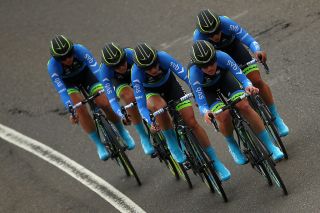 Leah Dixon (Tibco-SVB) won the fourth stage of the Zwift Tour for All in a small group sprint held in the virtual world Watopia. She sprinted past former Zwift Academy winner Tanja Erath (Canyon-SRAM) and Teniel Campbell (Valcar) right at the line.

"It's been a brilliant week and it shows how well we do together as a team," Dixon said. "Everyone gets on great and I think that's building up our performances.  We want each other to do well, push each other and support each other."

The fourth stage of the Tour for All was held on the Sands and Sequoias route of Zwift’s Watopia world. The race was 42.6km with a mountain ascent for points on laps one and two, along with points awarded to the winner of the stage.

Zwift Tour for All: Moolman-Pasio dominates the Epic on stage 3

Marianne Vos wins stage 1 of Zwift Tour for All

The field stayed mainly intact for the duration of the women’s race but dwindled to roughly 12 riders in the final 5km. The contenders for the finish included time trial world champion Chloe Dygert (Twetny20), Marianne Vos (CCC-Liv), Tanja Erath (Canyon-SRAM) and Teniel Campbell (Valcar), among others.

Dygert attacked with 500m to go but was quickly followed by April Tracey (Drops), Campbell and Erath. In the end, it was Dixon who stormed through the field and crossed the finish line first.

Tour for All ends with stage 5 on Friday with a summit finish on Alpe du Zwift.