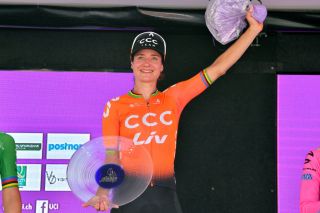 Marianne Vos (CCC-Liv) lived up to her favourite status to win the first stage of the women’s Zwift Tour For All on Monday, foiling late attacker Cecilie Uttrup Ludwig (FDJ Nouvelle-Aquitaine Futuroscope) with a powerful sprint.

Uttrup Ludwig had grabbed maximum points at the intermediate sprint on the final lap, and turned it into a solo bid for glory. The Dane was still alone and bearing down on the line with 150 metres to go, until Vos, using an aero power-up, came surging past.

“I don’t have lot of experience on Zwift, but I have some experienced teammates and as this is a team event, we really tried to make the best of it, so thanks very much to Ashleigh Moolman Pasio and Riejanne Markus for giving me some tips,” said Vos.

“I enjoyed it. It was a nice race and certainly on the last lap you really get that race feel.”

The Zwift Tour For All is a five-stage race featuring nine teams of five riders. While there is an individual stage winner each day, the race as a whole is a team event, based on points gained at the finish line and the intermediate sprints on each lap.

The first stage took place over six laps of the 8.8km Innsbruck circuit, which features the punchy ‘leg-snapper’ climb 4km shy of the line, followed soon after by the intermediate sprint.

While Canyon-SRAM’s best finisher was Jess Pratt in sixth place, they took the lead in the overall standings thanks to strong showings at the intermediate sprints, plus Tanja Erath’s eighth-place finish. Canyon-SRAM have 70 points, followed by Team Tibco-Silicon Valley Bank on 64 and Twenty20 Professional Cycling on 59.

Streaming of the race began on the fourth of the six laps, by which point a group of nine riders had established a lead of one minute over the rest. Along with Vos, Uttrup Ludwig, Dixon, Van der Breggen and Pratt were Krista Doebel-Hickok (Rally Cycling Women), Simone Boilard (Twenty20), and the Valcar-Travel & Service duo of Vittoria Guazzini and Ilaria Sanguineti.

Sanguineti beat Van der Breggen and Vos to the intermediate sprint on lap 4 but was dropped on the climb on lap 5, shortly before Uttrup Ludwig took the sprint ahead of Dixon. The now eight-rider group had a lead of one minute heading onto the final lap, but they almost wasted it entirely as riders started to try and save energy for the finale.

The chasing group came back into view ahead of the final climb and closed to within a handful of seconds, but the race exploded again on the climb and they stayed clear, despite Guazzini dropping back to Sanguineti.

At the final sprint, Uttrup Ludwig once again forged clear and took maximum points ahead of Van der Breggen and Pratt. She turned it into a bid for the stage glory, taking a handsome gap into the final kilometre. She had the line in sight, but Vos, using an Aero Boost that reduced her drag, came storming past at the last.