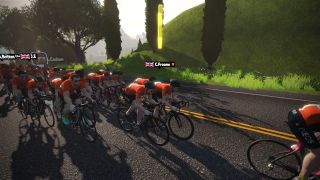 Freddy Ovett (Israel Start-Up Nation) took victory on the opening stage of the Zwift Tour for All, edging out Emmanuel Morin (Cofidis) and Mathieu van der Poel (Alpecin-Fenix) in a sprint finish for the line in virtual Innsbruck.

The finish came down to a bunch sprint from a small group who had stuck together for much of the race, with nine men battling it out for victory in the closing metres.

With Ovett's win, Israel Start-Up Nation took the team win, with 85 points accrued through the intermediate sprints and finish. EF Pro Cycling lie second with 68 points while Alpecin-Fenix are third on 62 points ahead of NTT Pro Cycling on 61.

The first stage of the men's Tour for All saw the virtual peloton – consisting of nine teams of five riders each – tackle 53km of a flat circuit race of the Zwift Innsbruck circuit.

Six laps were on the menu, with each lap 8.8km long, featuring a punchy climb midway through, a cobbled section which would increase resistance on rider's home trainers, and an intermediate sprint.

The race saw a quiet start until things sprung into life on lap 3. There, a small group of 15 riders got away. Van der Poel, Dan Martin (Israel Start-Up Nation), Rigoberto Uran (EF Education First) were among the star riders to make the move.

By the fourth lap, the work of Ryan Gibbons (NTT Pro Cycling) had given his team a big lead in the team classification, with the squad picking up 22 sprint points with two to go. EF Pro Cycling lay in second with 10 points, while Gibbons was there again on the penultimate lap to grab five more.

Richardson slipped away using the ghost powerup as the ticker hit 10km to go, taking a six-second lead as he passed the finish line for the penultimate time at the 8.8km mark. The Brit was caught by a slimmed-down chase group with 6km to race, as Cataford countered heading into the climb.

The Canadian was brought back and spat out the back on that final hill, though the remainder of the group had stuck together. Wright was the next man to go, pushing on in the final kilometre but couldn't stick the move.

With 500 metres to go, Uran launched a late move, with a handful of riders chasing him. Among them was Ovett, who timed his sprint just right to come through and take the victory.