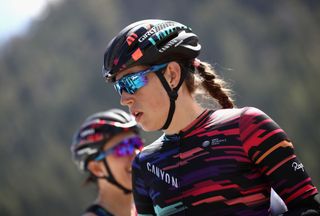 "I'm super happy to win," Erath said in a post-race press conference. "A stage win is always something special. Zwift is kind of my thing, so I should win a stage and it worked out so I'm super happy."

TIBCO-SVB continue to lead the overall classification with 197 points, while Canyon-SRAM trail in second place with 174 points. Drops are positioned in third place with 150 points.

The third stage of the Virtual Tour de France covered two 24km laps of the upper half of Zwift’s newly released France map. The R.G.V. route started with 12km of flats with an intermediate Pavé Sprint at the 11.9km mark and then at the 36km mark on the second lap.

The route also included one Queen of the Mountain ascent on each lap at Aqueduc, with an average grade of 4 per cent, at 13.8km and 37.9km. The peloton then descended toward the Ballon Sprint at 18.1km and 42.2km on each circuit, which then led straight into the start/finish line on the Marina for a total of 48km of racing.

The Virtual Tour de France has attracted the top teams in the world including Boels Dolmans, Canyon-SRAM, TIBCO-SVB, Drops and Rally Cycling, to name a few. The event is based on a points system whereby the first rider to cross the finish line scores 50 points, and points are awarded to the top 25 riders. 10 points are also available to the winner of each intermediate sprint and mountain ascent. The team that accumulates the most points at the finish line takes the overall lead.

The main field stayed together for the first 12km of flats but the riders began to separate over the Aqueduc climb where Tacey crossed the line first to take 10 points. The field regrouped on the descent, with Alice Barnes (Canyon-SRAM) taking points at the Ballon Sprint.

The smaller field of roughly 25 riders raced through the start/finish line in Marina to start the second lap. Heading into the Pavé Sprint, Loretta Hanson (Trek-Segafredo) stormed over the line to take 10 points for her team.

Kathrin Hammes (Ceratizit-WNT) took the points at the top of the Aqueduc climb, which then whittled the field down even further into the last half of the second loop.

CCC-Liv made their presence known on the second lap and led the peloton into the last intermediate Ballon Sprint, won by Riejanne Markus.

The team then continued to push the pace into the final 6km of the race but they were followed closely by TIBCO-SVB and Canyon-SRAM. The sprint opened up early and it was Erath who won the stage in a close sprint ahead of Dygert and Tacey.