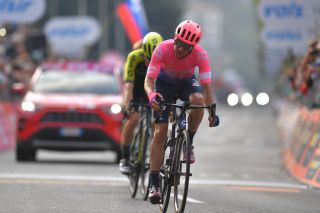 The Canadian sustained a broken femur in a crash at Paris-Nice in March but he showed just how well his rehabilitation has progressed with an assured victory in the Zwift race. Woods dropped the NTT duo one after the other in the finale, and he outlined the key difference between racing in a virtual space and competing on the road.

“Normally in a race you can look them in the eye and see how they're feeling, instead could just see the W/kg on the side [of the screen] and I just kept hoping they'd crack a lot earlier than they did,” Woods said. “Fortunately, I was able to keep it going.”

The 22km race began at a brisk pace and the virtual peloton began to split up once they hit the lower slopes of the Ventoux, where Woods was immediately to the fore. He made his first acceleration with 10km, and only Pozzovivo and Jonas Vingegaard (Jumbo-Visma) could immediately respond.

They were joined soon afterwards by Eddie Dunbar (Ineos) and the NTT trio of Louis Meintjes, Ben O’Connor and Stefan de Bod, while Romain Bardet (AG2R La Mondiale) lost contact with the leaders after battling to stay on terms.

Woods continued his onslaught with 7km to go, and this time only Meintjes and Pozzovivo, who were riding side-by-side at a training camp in Lucca, could follow. The trio quickly established a decisive gap over the chasers, though it gradually became apparent that Woods was the day’s strongman.

With 4km to go, Meintjes lost contact with the front group and Woods proceeded to kick his way clear of Pozzovivo with 3.5km to go.

Woods had 16 seconds in hand as he entered the final kilometre and he completed his effort smoothly to claim a morale-boosting victory as he prepares to return to road racing at Strade Bianche on August 1.

After Freddy Ovett’s victory on stage 4, Woods is the second former runner to win a stage of the Virtual Tour de France and the 33-year-old believes that his background as a sub-4-minute miler is an advantage for such sustained efforts.

The effort – and the win – will stand Woods in good stead as he returns to competitive action just over months on from his career-threatening crash at Paris-Nice.