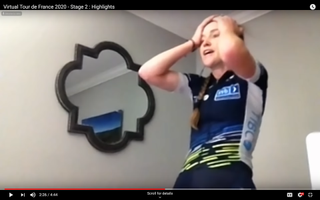 Lauren Stephens (TIBCO-Silicon Valley Bank) put a summer's worth of experience on Zwift to good use, taking out the final stage of the Virtual Tour de France in a frantic sprint on the Champs-Élysées ahead of Drops' April Tacey and Georgia Simmerling (Twenty20).

Stephens' win, which came thanks to a perfectly timed use of the aerodynamic power up to catch and pass world time trial champion Chloe Dygert before the line, cemented her team's overall victory.

Not only did TIBCO-Silicon Valley Bank win the overall but also the points and mountains jerseys, with only the best young rider classification going to Canyon-SRAM.

"It’s been an incredible team achievement," Stephens said. "Winning the yellow jersey as a team and the final stage was more than we expected coming into first Women’s Virtual Tour de France.

"We came into the stage today focused on taking the green jersey because we knew we were going to keep the yellow jersey. We knew a hard, controlled race was best for our team and that’s what we did today."

Stephens, who lives in Texas, was up before 7AM to get on the bike while riders in other parts of the globe were riding late into the night. Team director Rachel Hedderman said putting it all together was a challenge.

"Its been a lot of fun but hard work, too, trying to coordinate time zones. We had riders racing at 4 in the morning and 11 at night but they were all committed. On race day, we’re communicating very well with each other during the race and that’s been key."

With TIBCO well ahead in the general classification, the final stage of the women's Virtual Tour de France was more a battle for the sprinter's green jersey with six sprints along the 42.8km simulated Champs-Élysées route on Zwift.

Team TIBCO-Silicon Valley Bank, having secured the maillot jaune, faced stiff competition from Canyon-SRAM with Nina Kessler and Emily Newsom taking turns nabbing points in the early sprints to help push TIBCO to the top of the standings.

The high pace saw a number of riders distanced by the halfway point, with white jersey holder Tanja Erath left behind.

Dani Christmas (Lotto Soudal) took the final intermediate sprint ahead of TIBCO's Newsom and Lauren Stephens with 11.5km to go and tried to force a split but was caught under the Arc de Triomphe.

Christmas put in a second attack with 5.5km remaining and opened up a solid gap this time but quickly ran out of steam and was overtaken by the leading group of favourites.

It came down to the final sprint with Dygert hitting out first and visibly stunned to find that the Zwift game penalizes riders in the wind. Despite putting out massive watts, the Olympic silver medalist was swept away by Stephens, who held off Tacey and Simmerling by a wheel.