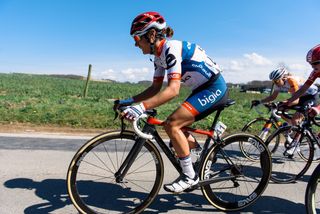 Moolman-Pasio and Gigante escaped from an elite group with 5km to go on the climb, opening up almost a minute on the chasing group led to the line by TIBCO-Silicon Valley Bank's Lauren Stephens, Leah Dixon and Kristin Faulkner.

The efforts of TIBCO-Silicon Valley Bank to stack the top 10 ensured the team kept the race lead.

At just 22.9km, stage 5 was the shortest of the Virtual Tour de France - a welcome distraction to the coronavirus pandemic that shut down all real world racing in mid-March. The stage started out flat with a sprint at kilometre 7, won by Brodie Chapman (FDJ-Nouvelle-Aquitaine Futuroscope) before heading up to Chalet Reynard, a 12.12km simulation of the lower slopes of the Mont Ventoux.

Dani Christmas (Lotto Soudal) was the first to attack on the climb but was quickly reeled in by the peloton, which was now reduced to the main favourites.

Moolman-Pasio put in a surge with around 5km to go that only Gigante could match. Then, making up for last weekend where her Zwift app locked up and she was shut out of stage 4, the South African champion put in her winning move with 1.7km to go.

"It was really great to win today for my team CCC-Liv," Moolman-Pasio said. "Luckily, I had no technical problems today. Last week was a big disappointment with the drop out.

"I’m very happy to have had a smooth ride today, and it was great to win the stage."

Second place was Gigante's best result of the Virtual Tour de France. The Australian's result helped her team solidify an 18-point lead over the Drops team.

"There’s no doubt that she’s a great talent and that was evident during the Tour For All, but I did feel confident," Moolman-Pasio said. "I did feel smooth and I was keeping the real surge and push for the last few kilometres.

"I think the racing on Zwift has been really great for women’s cycling. I have a lot of appreciation for Zwift and the push they give women’s cycling. They make it their mission to do everything equal. It’s really good to have forward-thinking brands. When we’re given the platform there’s an appetite to watch our racing."