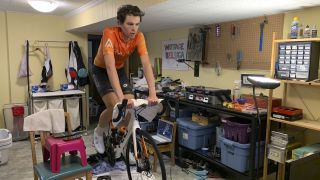 Dal-Cin got the better of Jake Stewart (Groupama-FDJ) and Callum Scotson (Mitchelton-Scott) in a sprint finish at the end of 48 largely flat kilometres of racing.

Yellow jersey Ryan Gibbons (NTT Pro Cycling) opened up the sprint but was unable to repeat his stage 1 victory, having spent a good deal of energy at the intermediate sprints and climbs. The South African placed fifth, with teammate Rasmus Tiller sixth, to ensure the maillot jaune will remain within the NTT team camp.

"I’m beyond stoked," said Dal-Cin. "We definitely pulled out all the stops as far as set-up went, to give us a fighting chance. I’m beyond thrilled with being able to pull out a result for the team."

The new R.G.V course measured 24km in length and featured two intermediate sprints either side of a short climb at the Pont du Gard aqueduct, just past the half-way mark. The riders covered two laps, tackling the snaking run-in towards the flat finish.

A gruppetto was formed early during a fast first lap, with 40 riders left in contention by the bell. NTT made a conscious effort to mop up points at the intermediate sprints and climbs, and were rewarded by retaining not only the yellow jersey but also the green jersey as leaders of the points classification.

The South African team looked in a strong position to take the stage win, too, with all their team in the front group heading to the finish, green jersey Edvald Boasson Hagen and sprinter Max Walscheid joining Gibbons and Tiller. However, despite Gibbons’ early move it was Stewart who surged clear in the home straight. The young Brit looked to have crossed the line first but victory went to Dal-Cin.

"Our coach told us that in the twisty section the draft comes and goes, so just stay up front, and I did so until 200m to go and used my power-up and sprinted with everything I had," Dal-Cin said. "I looked up to see the finish screen and saw I was first, so that was pretty cool."

In the overall standings, NTT Pro Cycling lead on 193 points, followed by Rally Cycling in 156 and Trek-Segafredo on 127. As such, NTT will elect which of their riders wears the yellow jersey on Sunday’s stage 4.

In the points classification, NTT are way out in front on 161 points, with Mitchelton-Scott on 85 and CCC Team on 65. Israel Start-Up Nation have the polka-dot jersey as leaders of the mountains classification with 17 points, one ahead of Alpecin-Fenix and seven ahead of EF Pro Cycling.