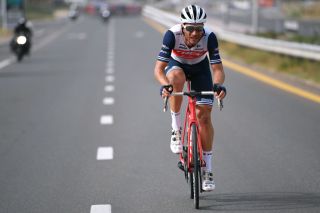 Will Clarke (Trek-Segafredo) won the sixth and final stage of the Virtual Tour de France, which saw riders take on six laps of a pixelated version of the Champs-Élysées. The Australian beat Filippo Ganna (Ineos) and Ryan Gibbons (NTT) to the line in a bunch finish.

“Last week I went too early in the sprint and I figured out how early I went and made sure this week I timed it right. It was still hard to pass everyone, I came from a long way back,” said Clarke, the second Trek-Segafredo rider to win a stage after Julien Bernard.

“Julien started if off really well. After that, the goal was to finish up there in the classification and to try and win one more stage. Two wins is a good result for the team.”

Bryan Coquard (B&B Hotels-Vital Concept) led out the sprint but he was overhauled by Edvald Boasson Hagen (NTT) as the virtual Arc de Triomphe came into view.

Boasson Hagen, however, was caught and passed in the closing metres as riders availed of the variety of ‘power-ups’ on the Zwift platform and timed their final efforts accordingly.

The overall classification of the inaugural Virtual Tour de France was won by the NTT team, whose owner Doug Ryder feted the achievement.

The virtual peloton featured Chris Froome, who has worn the maillot jaune down the real Champs-Élysées on four occasions. The Briton is currently training at Mount Teide in preparation for the real Tour de France and, like others patching in to compete from altitude, he lost contact with the front group in the early part of the race.

Some 30 or so riders were still in contention on the final lap of the race, where Luke Durbridge (Mitchelton-Scott) and the strong NTT delegation were to the fore. With a little over 1.5km to go, the Groupama-FDJ duo of Benjamin Thomas and Bruno Armirail launched a coordinated attack and they held a small lead coming into the final kilometre, only for Boasson Hagen to snuff out the move.

The Norwegian kicked again after Coquard had opened the sprint, but he was swarmed in the closing metres, where Clarke timed his final effort to perfection to claim the win.

“It is really hard,” Clarke said. “Basically, I had to do 400W for an hour and then sprint at the end. There are a lot of spikes and surges – sometimes you're pushing over 500 or 600W to try and not get dropped. Half the thing is staying far enough to the front that you don't get dropped.”