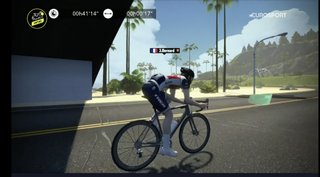 Julien Bernard (Trek-Segafredo) came away with a win on stage 2 of the Virtual Tour de France. The Frenchman left it late, coming around Freddy Ovett (Israel Start-Up Nation) and Michael Woods (EF). It looked as though Ovett had the win in the bag but he was caught just before the line by Bernard after the Frenchman used a late power-up.

Patrick Bevin (CCC Team) had attacked in the final 600m but he was brought back just before the sprint opened up. NTT kept their lead in the race and will wear the maillot jaune next weekend for stage 3.

Like the women’s field the men’s race took place over a 29.5km circuit with two climbs on the route. 2018 Tour de France winner Geraint Thomas (Team Ineos) blowing the race apart on the lower slopes of the climb. It was a clear tactic from Ineos as they looked to drop the sprinters as quickly as possible.

Thomas dragged a small group away with him briefly but he was soon back in the main group as Michael Woods (EF Pro Cycling) jumped clear. Tao Geoghegan Hart (Team Ineos) went after the Canadian but the pair were unable to establish a significant gap on the climb.

As the race turned left and climbed towards the radio tower both Geoghegan Hart and Woods were in contention at the front of the race and the pair joined up with Nicolas Edet (Cofidis) and James Piccoli (Israel Start-Up Nation) as the race began the descent towards the finishline.

The leaders saw their advantage reduced with Bevin and a small chase creating a 15-rider group inside the closing kilometers. Woods went again with 1.5km to go but it was Trek Segafredo with three riders at the front that made the difference. Ovett looked good for the win but he was just beaten at the line by Bernard.