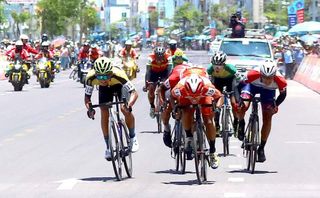 Following a well-deserved rest day after completing seven stages in a row, the peloton of the 32nd HTV Cup returned to action and saw the victory of Nguyen Duong Ho Vu from TP Ho Chi Minh 2 from a 10-man breakaway at the end of a 230km long stage to Quy Nhon. It was the longest of the 18 stages scheduled for this year's edition.

"I'm surprised to win the stage but it was my team's intention to send me up the road for that", said Nguyen Duong Ho Vu who out-sprinted Huynh Thanh Tung from the Quan Khu 7 team and Nguyen Van Duong from Hanoi. He signed the second stage victory for TP Ho Chi Minh 2. None of the ten breakaway riders was part of the 23 who remain eligible for the overall classification. 18 of them are within the same minute.

Therefore, there was no change on GC. The peloton arrived just under one minute after the escapees. Nguyen Tan Hoai who won stage 1 retained the yellow jersey he put back on after stage 3.

Stage 9, starting at 6.45am to avoid the scorching heat, will be a shorter but more difficult one from Quy Nhon to Pleiku (167km) with two climbs on the menu: An Khe pass and Mang Yang pass. They can shape up the King of the Mountains classification currently led by Spain's Javier Sardá Perez from TP Ho Chi Minh-MM Mega Market but they're located quite far away from the finish.