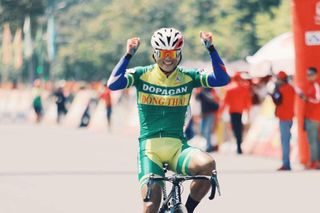 Already a stage winner on the second day of racing, Tran Tuan Kiet struck again for his Dopagan team as he claimed stage 10 of the 32nd HTV Cup ahead of Quang Van Cuong (Hanoi) and Ha Kieu Tan Dai (Binh Duong). Nguyen Tan Hoai (Domesco) retained the lead in the general classification.

“I’m very happy for this second victory,” said Tran à Tuan Kiet, who is coached by the famous Vietnamese former sprinter Do Tuan An.  “I thank my team for the help. It was good to be two teammates in the front group and it was easier to escape as we aren’t competing for the general classification anymore.”

The peloton was led by Nguyen Tan Hoai’s Domesco team. The race leader, who is also targeting the points classification, won the bunch sprint for eighth place, 5:32 behind Tran Tuan Kiet.