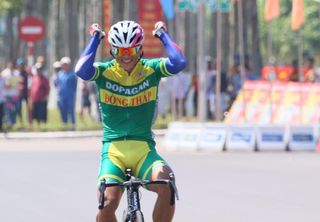 In a day of many surprises at the HTV Cup in Vietnam, sprinter Tran Tuan Kiet claimed the first win for his Dopagan team while Nguyen Tan Hoai from Domesco retained the yellow jersey.

"I thank my coach and my team for their support," Tran said. "Even though we are not competing for the general classification anymore, we’re still here to do our best to win stages."

The first surprise was that there was a stage on May 25! On the original race schedule, it was a day off but organizers made a last minute change to set up a 50km criterium in Tam Ky. The second surprise came from the judges. Following appeals by some sport directors, 55 riders were declared ineligible for the overall classification anymore as they didn’t make the time cut of 5% on stage 6 as a consequence of the big crash with 57km to go.

78 riders took the start of the criterium but only 23 remain in contention for GC with Nguyen Tan Hoai leading with an advantage of 24 seconds over Nguyen Truong Tai from Ho Chi Minh while defending champion Javier Sardá from Spain has a deficit of 45 seconds. None of the seven members of the Dopagan team are among those 23.

To avoid any confusion, it must be clarified that Dopagan is a paracetamol 500mg produced by the Domesco company. Therefore, the Dopagan team of stage winner Tran Tuan Kiet and the Domesco team of race leader Nguyen Tan Hoai aren’t exactly rivals, as much the two teams from Ho Chi Minh City that have the same jersey design but one with orange colour and the other one with red have been seen combining forces occasionally.

Following stage 7, there’s definitely a rest day scheduled in Tam Ky on May 26.