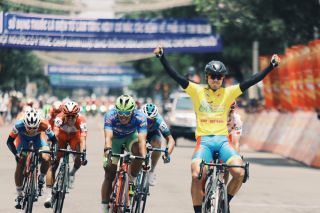 Nguyen Tan Hoai of Domesco took his fourth stage victory on the ninth day of racing at the HTV Cup that reached half way into its 32nd edition at the end of the 167km long stage from Quy Nhon to Pleiku.

Opening his final rush 100 metres before the line, he out-sprinted Trinh Duc Tam from Loctroi and import riders Javier Sardá from Spain and Loïc Desriac from France and extended his lead in the overall classification.

"I'm very happy to have won four stages out of nine so far," Nguyen Tan Hoai declared. "Today's victory has a very different flavour than the previous three because the course was long and up and down all the way. I wouldn't have made it without the help of my team-mates. They supported me continuously."

A fierce battle was noted from the first King of the Mountain price as 13 riders went up the road early. Among them, Tran Thanh Nhanh of TP Ho Chi Minh 2 was doing most of the work. He won the first intermediate sprint, too. Nguyen Tan Hoai got dropped in the main climb but his Domesco team brought him back on in order to save his yellow jersey.

On the other hand, Nguyen Huong of Bikelife Dong Nai couldn't make it across and lost the white jersey to Nguyen Van Binh of HCMC-MM Mega Market. They are the only two remaining young riders from the 23 men still in contention for the overall classifications.

"Today I decided not to choose to play safe," Nguyen Tan Hoai added. "I went for points and time bonuses to get as much advantage as possible before the mountainous stages. I was confident in my sprint because I could see the other sprinters had spent a lot of energy in the climbs."