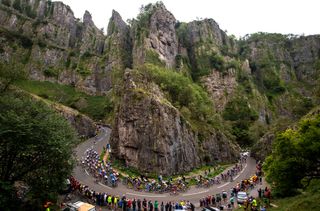 How to watch the Tour of Britain – live streams from anywhere

Carapaz ruled out of Tour of Britain due to visa issues

Every year there is a new angle in the story that the Tour of Britain has written since 2004, but this year's is obvious: it's an ideal build up event on British roads for the upcoming World Championships in Yorkshire.

Not that all the stages will resemble the lumpy, technical parcours of Harrogate – although a few will do just that - but the Manchester finish comes 15 days before the elite men's race, giving plenty of time for recovery before the big day.

Not surprising then that the field is one of the strongest that the race has ever seen, headed by the prodigious Mathieu Van der Poel, whose victory in the Amstel Gold Race in late April makes him an obvious favourite for Harrogate.

Van der Poel will also be a contender for the British title, although his Corendon-Circus team won't be as strong as the WorldTour teams present at the race.

Scroll down through the teams and the obvious Worlds contenders stand out, along with those who may figure in their respective national teams in support roles.

After Richard Carapaz's withdrawal due to visa issues, Movistar are led by Mikel Landa – who is just explosive enough to have hopes in Harrogate.

Meanwhile, others who will have their eyes on the World's include former European champion Matteo Trentin – winner, lest we forget, of a hilly Tour de France stage this year. Then there's Tony Gallopin (AG2R La Mondiale), Sebastian Langeveld (EF Education First) and Tiesj Benoot (Lotto-Soudal).

The presence of a time trial over rolling roads in Worcestershire on stage 6 will condition the race a little, though perhaps not as much as in 2013 when Sir Bradley Wiggins won the time trial by 36 seconds on the way to clinching overall victory.

The 14.4km stage is an obvious target for Katusha-Alpecin's British time trialists Alex Dowsett and Harry Tanfield. The absence of a pure time trial specialist among the race favourites and the toughness of the other stages means that a repeat of 2013, with one team shutting down the race for a TT specialist to clinch it, seems unlikely.

The weekend's stages in Scotland are typical rolling Tour of Britain fare which should end in bunch sprints. The fastest sprinter in the race is Dylan Groenewegen, who heads up that massively strong Jumbo-Visma squad, but the most motivated will probably be Mark Cavendish.

The consensus may be that Cavendish, is past his best, but is still without a contract for next year and so needs to win, whereas the other fastmen may merely want to win.

After an uphill finish into Newcastle on stage 3 – shades of the erstwhile Wincanton Classic 30 years ago – the following day sees the toughest stage of the race. There, the peloton will cross the North Pennines and into the Lake District finishing up the short but tough climb of Beast Banks in Kendal.

It's similar in difficulty to the stage here won in 2016 by Steve Cummings – who takes the start for the Dimension Data team this year – but features 3000 metres of climbing, including ascents such as Bollihope Common.

The chances are the overall standings will be fashioned here, and one key question is how Van der Poel handles those longer climbs, rather than the punchy ascents which are his speciality.

The sprinters get another chance in Birkenhead on stage 5, after which it's the time trial and then a finish for the puncheurs on stage 7 in Burton Dassett Country Park, definitely one for Van der Poel or another of the men with their eye on the Worlds.

After that, the last day around Manchester should see a reduced group contesting the finish in Deansgate, with the steep ascent of Ramsbottom Rake far enough from the finish to allow some regrouping. Again, watch the winner, as he may well be a contender on the other side of the Pennines in 15 days time.