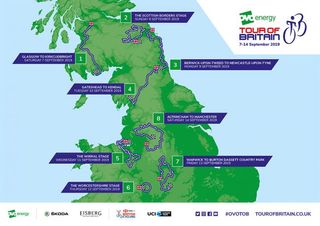 The 2019 Tour of Britain kicked off in Glasgow, Scotland, on Saturday, and, already two days in to the eight-day stage race, we've had two WorldTour stars take impressive stage wins, with the race set for more excitement this week.

Jumbo-Visma's Dylan Groenewegen – a stage winner at this year's Tour de France – took the opening stage in Kircudbright before Matteo Trentin (Mitchelton-Scott), who also won a stage at this year's Tour, got revenge for his third place on the opening day to win the second stage in Kelso on Sunday, which was also enough for him to take over the race lead.

The Italian and his teammates will have their work cut out over the remaining six stages, however, and even if Trentin can defend his lead on the uphill finish into Newcastle-upon-Tyne on Monday, the climbing really begins in earnest the next day on stage 4 from Gateshead to Kendal.

How to watch the Tour of Britain live stream: UK

ITV4 are broadcasting this year's Tour of Britain live and free-to-air in the UK. It's also being broadcast on Eurosport, which can be found in basic Sky TV packages. With a Eurosport Player monthly or annual pass, you can access the live stream from just about any internet-connected device. You can try it out for free.

How to watch the Tour of Britain live stream: North America

The 2019 Tour of Britain is being shown live in the USA and Canada with daily online streaming at Fubo.TV. Fubo.TV has a broad sports offering with dozens of different networks in a package that costs US$19.99 to try for a month, then US$44.99 per month beyond that. To view the Tour of Britain, you need to also purchase the International Sports package for US$11.99 per month for customers to be able to access the races.