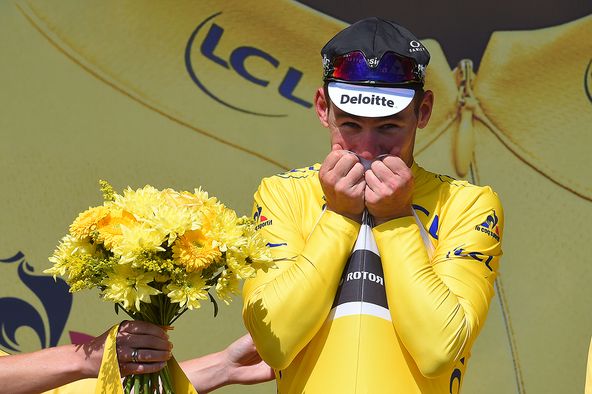 It will be hard for Mark Cavendish to top his 2011 season, winning the green jersey in the Tour de France and the rainbow stripes of World Champion – but Cavendish has big dreams, and they’re centred around July, riding the Tour de France and then the Olympic road race in London. Not that the rest of the peloton will be making it easy for him – and it will be interesting to see whether the move from HTC to Sky will affect his racing. Whatever happens, there are sure to be the usual fireworks!

It was a huge year for Cavendish – his three stage wins at the Giro d’Italia and his win at Scheldeprijs were all just a warm-up for his big campaign to finally win the Points jersey at the Tour de France – and despite fears that the changes to the competition would rule him out of it, he won the jersey in fine style, taking five stage wins in the process, and bringing his total number of Tour victories to twenty.

That could be seen as enough for most riders – but Cav was determined to go one better, and with the World Championships course perfectly suited to his skills, and Team GB taking the lead for most of the race, he was perfectly set up to become a World Champion for the third time, adding the Road jersey to his two track titles.

The year started badly for Cavendish, after complications from dental surgery impacted on his riding, and was followed by controversies in Stage 2 of the Tour de Romandie, Stage 4 of the Tour de Suisse and the first stage of the Tour de France. But although he didn’t meet his goals of the Green Jersey and the World Champion title, his results more than made up for the rest of the year, and his Vuelta wins meant he had won stages in every Grand Tour.

Cavendish’s win in Milan-San Remo, sprinting to beat Heinrich Haussler right on the line, answered anyone who thought he couldn’t make it over mountains. Other highlights included his six wins at the Tour de France, four at the Giro d’Italia, and becoming the first British rider to ever wear the Giro’s magliarosa.

After starting the year winning the Madison World Champion jersey with Bradley Wiggins, Cavendish went on to show what he was capable of on the road, winning his first Grand Tour stages in the Giro d’Italia and four stage at the Tour de France. He left the Tour early to race the Madison in the Olympics, but was disappointed to finish ninth.

Cavendish’s first road season as a pro included 11 wins, including Scheldeprijs and two stages of the Volta a Catalunya, but crashes in the tour de France meant he couldn’t show what he was capable of, and he abandoned on stage 8.

Analysis Who will join Landa? Does Cavendish deserve a chance?

Deal A jersey from a vintage year for the team that was home to Cavendish, Boasson Hagen and Greipel

News Ride As One Series begins on April 2 at 5 p.m. CET