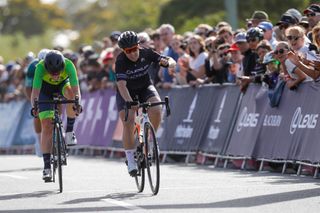 Chloe Hosking (Lexus of Blackburn) won stage 2 of the Bay Crits, beating fellow escapees Ruby Roseman-Gannon (Appelselec) and Matila Raynolds in the sprint to the line.

The race was marred by a crash on the final lap that saw Shannon Malseed fall heavily. The former Australian champion was taken to hospital by ambulance following the crash. Emma Chilton (Roxsolt-Attaquer) and Molly Patch (Appselec) were also among the fallers.

“I spoke with Shannon when I went into the hospital and she was sore but in good spirits, it appears she has damaged her shoulder and we are still waiting for a full medical report,” said race organiser John Trevorrow. “It is a tough sport, bike racing, but we hate to see an accident - she was in a lot of pain. She’s a tough cookie but it was upsetting, especially for Sarah Gigante because they’re close.”

The stage winner Hosking forged clear midway through the 45-minute race in a seven rider group that was later reduced to four thanks to the efforts of Amanda Spratt (Lexus of Blackburn). Spratt then helped to tee up Hosking in the finale, while helping herself to fourth place.

Hosking’s victory sees her move into the leader’s yellow jersey with one stage to go, though Roseman-Gannon is well placed to challenge.

“How good is it, [Ruby is] so young and taking it to the old girls, so it will be really exciting tomorrow,” Hosking said. “I have a really strong team here to help me so it would be really nice to keep the yellow tomorrow but it wouldn’t be the first time I’ve lost it in Williamstown so I’m pretty mindful of that.”