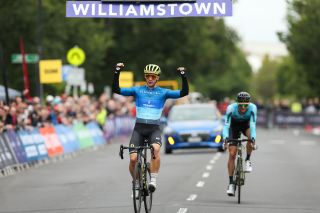 A rain shower delayed the start of racing on the final day, but once the roads dried, the action was as keenly-contested as ever, as Groves and Freiberg forged clear on the opening laps of the 900m-long circuit. Neither man was a threat to the yellow jersey of Nick White (BridgeLine) and they quickly established a sizeable lead over the peloton.

After half an hour of racing, they were within touching distance of the back of the bunch and they duly lapped their fellow competitors after 45 minutes, settling into the peloton before resuming their duel after the bunch had contested the sprint for third place.

In the final reckoning, Groves delivered a fine sprint to beat Freiberg to the stage honours. By then, Welsford had already won the sprint for third ahead of teammate Cameron Scott, and he also beat Brenton Jones (Novotel-Mitchelton) and White to the line to secure overall victory.

“It’s always good to start the year off with a win, there’s a lot of history in this race, I used to watch this race at home on TV as a kid, so to be on the top step and wearing this yellow jersey on the final day is pretty special to me,” Welsford said.

In the final standings, he finished 3 points clear of Jones, while White had to settle for third overall.

Groves, meanwhile, was pleased to have something to show for his efforts over the three days of the Bay Crits. “On Friday, I had a late dig at the [Ritchie Boulevard] criterium and messed up that final corner, I thought it might have been my only opportunity,” he said. “But I thought today my dad’s down here watching and my aunty and uncle, so I thought I better put on a show and try again.”