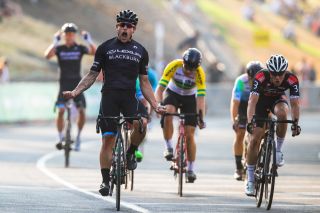 Reigning track scratch race and team pursuit world champion Sam Welsford streaked to victory for his Lexus of Blackburn team in the opening race of the 2020 Bay Crits in Geelong on Friday, out-sprinting Cameron Ivory (GPM Stultz) and Australian criterium champion Brenton Jones (Novotel-Mitchelton) at the end of what was a frenetic race.

Just as Jessica Allen had done in the women's race, Team BridgeLane's Ben Hill animated the early part of the race with a solo breakaway, and was joined just over half-way through the hour-long race by Australian road race champion Michael Freiberg (ARA Pro Racing Sunshine Coast).

However, the pair were caught by the ever-reducing peloton just a couple of laps later, when Hill's BridgeLane teammate Nick White attacked off the front to take over from where Hill had left off.

With just under 10 minutes left to race, Luke Durbridge took control with Kaden Groves on his wheel, looking to set things up for their Novotel-Mitchelton teammate Jones, while, at the same time, sprint rival Cam Scott (Lexus of Blackburn) saw his race end early after he crashed on the tight first corner of the 650m course.

Hill found the strength to return to the head of the peloton with five laps to go, but it was Groves who took over with a lap to go, constantly looking back for teammate Jones, who was still back in fifth or sixth wheel.

Welsford made it look easy, leading the sprint out from the final corner, but still had to hold off a fast-finishing Ivory, while Jones made up for lost ground to take the final podium position.

Just 19 finishers from 43 starters gave a good indication of how tough the Ritchie Boulevard course was, but it will be Welsford who'll wear the leader's yellow jersey into Saturday's race at Geelong's Eastern Gardens.