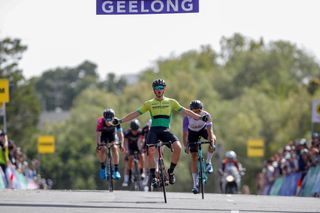 Nick White (BridgeLane) took the overall lead at the Bay Crits after he sprinted to victory on stage 2. The Australian under-23 champion claimed the bunch sprint after he produced a fine acceleration to beat Brenton Jones (Novotel-Mitchelton) and Jensen Plowright (BridgeLane).

The race was delayed by an hour following a crash in the women’s race, and when proceedings got underway, it was decreed that the race would be reduced in length from one hour to 45 minutes.

“It was tough, there was a lot of hanging around before the race due to the ambulances on course, give them the respect they deserve but there was definitely a bit of hanging around so the anticipation was building up and the nerves were building up,” White said. “Being a shorter race it was raced a lot more aggressively so it was raced pretty hard.”

The evening was marked by a flurry of breakaway attempts, but no group managed to gain any real traction in a high-speed event, although Luke Durbridge briefly split the field with a searing effort with three laps remaining. Lexus of Blackburn helped to bring the race back for a bunch sprint, where White’s fierce acceleration carried him to victory, while stage 1 winner Sam Welsford (Lexus of Blackburn) had to settle for 4th.

White carries the yellow jersey into Sunday’s final stage, though Welsford is level on points with him, while Jones is just a point behind in third place.

“It will definitely be a challenge tomorrow, by no respect am I going to think it’s going to be easy to hold onto this jersey but we’ll give it everything we’ve got and go down swinging,” White said. “We’ve still got a pretty strong team here in Jensen [Plowright], he’s a classy sprinter in his own rights and to have him in front of me tomorrow will be a huge confidence booster.”