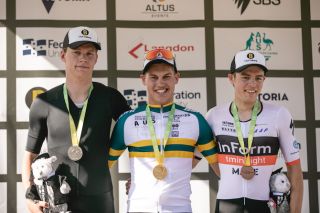 Mackenzie Edwardson (Team CCS Canberra Men) made the early running with a fine 41:08 over the 28.6km race, and his time held until it was swept decisively aside by the arrival of new Hagens Berman Axeon signing Jarrad Drizners, who won the under-23 criterium title in 2019, and had finished fifth in the time trial, but was starting mid-way through the 38 starters this year.

His 38:52 would give him fifth place once more by the end of the afternoon, but it held until Turnbull came home in 38:38.

Third-to-last man off, Alastair Christie-Johnston (Team BridgeLane), was unable to unseat Turnbull, which guaranteed Turnbull at least a bronze medal, which was indeed what he would end up with.

O'Brien then set the new best time with 37:58, leaving just Plapp – the silver medallist in the junior men's time trial at the 2018 World Championships in Innsbruck, Austria – to bring it home as the last man left on the course, and with ample time up his sleeve to celebrate a job well done.