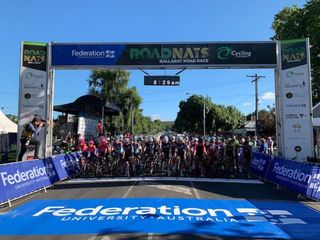 The 2020 FedUni Cycling Australia Road National Championships get under way in Ballarat, Victoria, on Wednesday, and promise to deliver a host of exciting races across the rest of the week and the weekend as Australia's best riders do battle for the time trial, criterium and road-race titles.

In what is another change to the schedule of events compared to last year, the opening day on January 8 will see the time trials for a number of categories start and finish at Federation University's Mt Helen campus in Ballarat, culminating that evening with the elite women's and men's events. Friday, January 10, sees the national criterium championships staged in central Ballarat.

Following the other categories' road races on Saturday, the elite women and men's road races take place on Sunday, January 12, over multiple laps of the now well-established 11.6km circuit that includes the tough climb up Mount Buninyong Road, ensuring that only deserved winners will don the white, green and gold national champions' jerseys come Sunday evening and the end of this year's championships.

The elite men’s time trial takes place on Wednesday evening over two laps of an undulating out-and-back 18.8km course in Ballarat, for a total distance of 37.5km.

Time trial world champion Rohan Dennis will line up to try to win back the title he lost to Mitchelton-Scott's Luke Durbridge in 2019. It will be Dennis' race debut for the British WorldTour squad Team Ineos, although he'll nevertheless be in his now-familiar rainbow skinsuit, having taken his second Worlds TT title in a row in Yorkshire in September.

Defending champion Durbridge has been honing his speed at the recent Bay Crits, not far away in Geelong and Williamstown, in the build-up to the TT championships – which very much look set to be a two-horse race – and looked in good form as he rode in the service of composite squad Novotel-Mitchelton teammates Kaden Groves and Brenton Jones.

Jones (Canyon dhb) will also be in town to try to defend his criterium national title on Friday afternoon over the same 40-lap, 44km race he won last year ahead of BridgeLane's Tristan Ward and Jay McCarthy (Bora-Hansgrohe), with Lotto Soudal's Caleb Ewan – a three-time criterium national champion – opting to keep his powder dry for last year's road race.

Ewan has chosen to skip the championships entirely in 2020, and will instead line up for his first race at the Tour Down Under later this month. The hilly Buninyong road-race course really doesn't suit the 25-year-old sprinter, although he'd perhaps hoped last year that his WorldTour pedigree might have counted in his favour against the home-based pros.

Sentimental fans need look no further than Meyer for a possible 2020 victory after he and Harper were pipped at the post by the fast-finishing Freiberg last season. It was a truly exciting finish, but Meyer's tears on the podium after his third place proved just how much a win here would mean to him, and he's Mitchelton's man most likely in a strong squad that also includes 2013 road race champion Durbridge, Michael Hepburn, Damien Howson and Lucas Hamilton.

Freiberg also comes armed with plenty of ARA Pro Racing Sunshine Coast teammates to assist him in trying to defend his title, while Harper will this year be on his own, having stepped up to WorldTour level with the Dutch Jumbo-Visma outfit. He'd dearly like to take the white, green and gold national champion's jersey to the Tour Down Under and then over to Europe for the 2020 season.

Grace Brown came out on top in last year's time trial in what was only her second race for her then-new Mitchelton-Scott team, after having taken 12th place in the road race.

She went on to take a stage win at the Women's Tour Down Under later that month, and the 27-year-old returns in 2020 to defend her TT title, which she won convincingly from teammate Gracie Elvin and Kate Perry (Specialized Women's Racing) last year, although she'll have to ensure that she's in top form again to hold off her own Mitchelton teammates, Amanda Spratt and Lucy Kennedy.

In Friday's criterium, Team CCS Canberra Women's Rebecca Wiasak will be looking to make it three titles in a row, while last year's podium of Sarah Roy (Mitchelton-Scott) and Ruby Roseman-Gannon (Brunswick Cycling Club) – with the latter showing that she was in excellent form at the recent Bay Crits – are two of the riders most likely to give Wiasak a run for her money.

Roy will then be on hand to help her Mitchelton teammates – Kennedy and Spratt, in particular – to try to take the road race title on Sunday, which has eluded the powerful outfit since 2017, when it was won by the now-retired Katrin Garfoot.

Former national champion Spratt – road-race winner in both 2016 and back in 2012 – will start as one the big favourites alongside defending champion Sarah Gigante, who returns as part of the US-based Tibco-SVB team, although the 19-year-old will be without teammate Shannon Malseed after the 2018 road race national champion crashed out of last week's Bay Crits series, and is now side-lined with a fractured shoulder.

Former Tibco rider Brodie Chapman, meanwhile, has joined French team FDJ Nouvelle-Aquitaine Futuroscope for 2020, and will be another favourite on the tough 104.4km course, alongside new teammates Lauren Kitchen and Shara Gillow.

Cyclingnews will have all the latest reports, results and news from the Australian Road Championships over the coming days, so be sure to follow what is certain to be some exciting early-2020 racing with us.