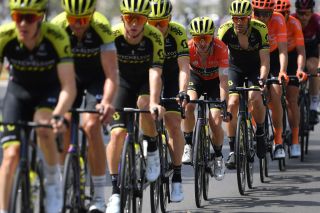 Winner Adam Yates and his Mitchelton-Scott teammates in action at the UAE Tour, which was shortened due to a coronavirus scare. (Image credit: Getty Images)

Mitchelton-Scott has announced that it has withdrawn both its men’s and women’s teams from all racing with immediate effect until at least March 22 in light of the ongoing coronavirus outbreak in Europe.

EF Pro Cycling and Jumbo-Visma earlier announced that they would forgo the upcoming slate of races in Italy due to concerns about competing in the European country with the highest number of confirmed cases of the coronavirus Covid-19. Mitchelton-Scott has gone further and withdrawn its riders from races in France, Belgium and the Netherlands as well as Italy.

It is anticipated, though not yet confirmed, that the forthcoming races in Italy will fall foul of a new government decree that limits large gatherings and sporting events, but no such restrictions have yet been implemented in Belgium or the Netherlands. On Tuesday, the French ministry for sport gave the green light for Paris-Nice to go ahead as planned, despite new measures to counter the spread of coronavirus in the country.

In its statement on Wednesday, Mitchelton-Scott said that it had decided to withdraw its teams from competition in the coming weeks "regardless of the individual Government Regulations in place." The Australian squad added that it had informed the UCI of its intentions and that it would monitor the situation before deciding on its participation in the slate of racing beyond March 22.

"We, as Team Doctors and the wider team, have a duty of care to protect health and wellbeing of all our riders and staff. We will not have any input into, or control over, the measures that race organisers may or may not put in place to manage the COVID-19 risks," read the statement from Mitchelton-Scott.

"We are a moving, international logistical puzzle, with staff and riders travelling between different countries with different health systems and strategies around COVID-19. Constant travel will increase the health risks and make management of logistics, potential quarantine periods, etc, extremely difficult.

"To withdraw any additional impact we as a team, either via illness or injury, may put on national and international health systems and hospitals. Whilst we have put in all the preparations and are eager to race, as an organisation we believe this is the best way to ensure we adhere to our duty of care to riders and staff, before returning to business as usual as soon as possible."

The final two stages of the recent UAE Tour were cancelled due to suspected cases of Covid-19 on the race. Mitchelon-Scott's Adam Yates was declared the overall winner, but all riders, staff and media on the race were placed in lockdown in their hotel Abu Dhabi for three days before the bulk of them were permitted to leave the country.

Both Parkhotel Valkenburg and CCC-Liv team have also announced that they are pulling out of Strade Bianche Women.

STATEMENT: Mitchelton-SCOTT position regarding COVID-19.Following extensive discussions, we have made the decision to withdraw our teams from the next period of racing, regardless of the individual Government Regulations in place.More details 👇https://t.co/nV8lbx0eG4March 4, 2020