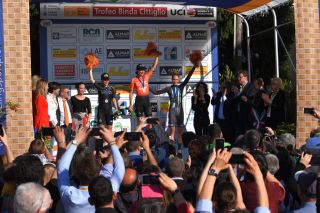 The Trofeo Alfredo Binda-Comune di Cittiglio and Strade Bianche are at risk of cancellation due to an outbreak of the coronavirus in the Lombardy and Tuscany regions of Italy. The Women's WorldTour races are currently still scheduled to take place in March. But the situation is being monitored by race public-health officials, event organisers and the UCI, before any further decisions are confirmed.

The Trofeo Alfredo Binda is held in Cittiglio, located 70km north-west of Milan, on the day after Milan-San Remo. A representative from Cycling Sport Promotion, the company that organises the event, told Cyclingnews that all sporting events are currently suspended in the area until March 1, and that they're awaiting more information from regional public-health authorities before they can determine whether the one-day women's race is clear to go ahead.

The long-running women's event is set to embark on its 43rd edition and, outside of the Giro d'Italia Internazionale Femminile, it is one of the most historical women's events in Italy.

"Currently the race is not cancelled but we have to wait until that [March 1] deadline and further information from the Public Authority."

The UCI issued a statement on Wednesday saying that it remains in close contact with organisers of international cycling competitions and the health authorities of host countries, including Italy, in order to contribute as much as it can to the limitation of risks of the virus spreading throughout the world.

"It is not currently possible to predict in the medium term whether competitions in this country [Italy] will be maintained or cancelled, given the rapidity with which new outbreaks are declared, like yesterday in Tuscany, Sicily and Liguria. In the short term, on the other hand, decisions to cancel or postpone events have already been taken [last weekend] by regional health authorities, in order to minimise the risks of transmitting the virus, which are made greater by travel and human gatherings in confined spaces."

There have so far been 74,000 confirmed cases of coronavirus, resulting in more than 2,000 deaths. The virus causes respiratory problems and can lead to pneumonia. It originated in Wuhan in the province of Hubei in eastern China.

The UCI issued a statement last Friday that provided information on the virus and announced the postponement of all UCI races in China in April and May.

The Tour of Chongming Island, also a Women's WorldTour event, was due to take place from May 7-9 but will now be rearranged for a later date, which will be confirmed on March 15.

There has also been fear surrounding the Olympic Games, set to take place from July 24 to August 9 in Tokyo, Japan. However, International Olympic Committee (IOC) member Dick Pound has told the Associated Press that the event is still "business as usual", and that any decision will be made in May in consultation with the World Health Organisation (WHO), according to a report on the BBC.

The UCI has also stated that it will strictly adhere to the recommendations given by the WHO, and the guidelines set out by the national authorities in charge of public health.

Italy has seen a rise in the number of cases of coronavirus patients over the past week, with 229 cases of the virus confirmed as of February 25, on top of some 100 awaiting confirmation.

Although the worst-affected areas have been the Lombardy and Veneto regions, Reuters reported on Tuesday that the virus is spreading with new cases reported in central Tuscany, the coastal region of Liguria and Sicily in the south.

This has led to Strade Bianche (March 7) and the GP Industria & Artigianato (March 8), both held in Tuscany, and Milan San-Remo (March 21), which works its way down through Lombardy before tracking along the Ligurian coast, all being at risk of cancellation.

Mauro Vegni, head of the race organisation RCS Sport that runs Strade Bianche, Milan-San Remo, Tirreno-Adriatico, and the Giro d'Italia, told Cyclingnews that he is mainly concerned about Milan-San Remo because it is located closest to the outbreak. Although he was not as worried about Strade Bianche, he said that organisers will continue to monitor the situation in Tuscany and how it could affect that race.

The Women's WorldTour started at the Cadel Evans Great Ocean Road Race in February. Since its inception in 2016, the series has traditionally begun in Italy at Strade Bianche, which will now mark the second round on March 7, while the Trofeo Alfredo Binda is scheduled to take place two weeks later on March 22.

If regional public-health officials recommend cancelling or postponing one or both of the one-day races to protect public health safety, they will join Tour of Chongming Island as the third Women's WorldTour race to be affected by the virus outbreak.

Although public health is the primary concern, it will be a major hit for the Women's WorldTour, which has already, for different reasons, lost Emakumeen Bira, the Tour of California and the Prudential Ride London Classique.

RideLondon moved its race date in 2020 to avoid conflict with the Olympic Games, but because it then overlapped with the Ladies Tour of Norway [August 13-16], the UCI denied its application to be among the events in the top-level series in 2020.

Organisers of Emakumeen Bira decided not to continue the long-running Spanish stage race, which was traditionally held in May. The gap in the Women's WorldTour calendar that month opened even further when organisers AEG announced that they had put their Amgen Tour of California men's and women's events on hiatus in 2020. With the postponement of the Tour of Chongming Island due to the coronavirus, it means that there won't be any Women's WorldTour races held in May.