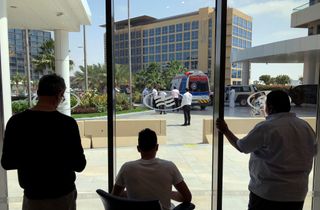 Riders and staff of the UAE Tour remain in quarantine in their hotel (Image credit: Getty Images)

The number of coronavirus cases linked to the UAE Tour has risen to 12 according to La Gazzetta dello Sport, with four riders reportedly positive for the virus. Some have been taken to specialist medical units, with the Italian consulate saying that all the Italians are well and not in a serious condition.

On Tuesday evening, the UAE Ministry of Health and Prevention (MoHAP) reported six new coronavirus cases have been found at the UAE Tour, arising from contact with the two team staff members whose infections saw the race draw to a premature close last week.

The Cofidis and Groupama-FDJ teams have confirmed their riders and staff have all tested negative but further testing appears to have discovered more cases amongst riders and staff of the Gazprom-RusVelo and UAE Team Emirates teams.

"The six individuals diagnosed with the new coronavirus include two Russians, two Italians, one German and one Colombian," read the statement from MoHAP. The new infections bring the total number of cases in the UAE to 27, with five of that number having been reported as fully recovered from the illness.

La Gazzetta dello Sport, owned by the same company as UAE Tour organiser RCS Sport, reported on the new cases, stating that the four riders said to be positive for the virus are reportedly two Russians, an Italian and a Colombian.

While the vast majority of riders, media and race staff tested negative for the coronavirus and 542 people were eventually allowed to leave the UAE, 70 riders and staff from the Cofidis, Groupama-FDJ, Gazprom-RusVelo and UAE Team Emirates are still in the country, although some riders from Groupama-FDJ were allowed to leave on Sunday and Monday.

The identity of the four riders positive for the coronavirus are not known. However, Fernando Gaviria is suspected of being one of them. Only two Colombian riders were at the UAE Tour and Hernando Bohórquez of Astana has been allowed to leave the country. Gaviria's family in Colombia told the El Tiempo website that they have on information about him and have been unable to talk to him.

Gazprom rider Igor Boev has confirmed to Russian media that he is in hospital but it is unclear if he has tested positive for the coronavirus.

"Despite being given the green light to travel home and the last tests carried out coming back negative, our team has decided to extend their stay in the UAE to continue testing everyone’s conditions and go home only with the safety of non-contagion," the team said on Sunday.

"In the context of this global emergency, the main goal is the safety of all of us and our family members. In light of some known cases of flu within our group and other teams, we will be tested again in the next few days and once the situation has improved, riders and staff will return to their families."

There has been no further communication from the team. Diego Ulissi was at the UAE Tour and so was unable to present at the birth of his daughter Anna on Tuesday.

On Wednesday the Cofidis and Groupama-FDJ teams have said all their riders and staff are negative after undergoing numerous tests for the Coronavirus. However they have confirmed they will have to stay in quarantine in their hotel rooms until March 14. Gazprom-RusVelo, Cofidis and Groupama-FDJ all shared the same floor in the Abu Dhabi hotel, with local authorities isolating them to stop the possible spread of the virus.

The Italian ambassador to the UAE, Nicola Lerner, told La Gazzetta dello Sport he has visited the Italians involved.

"They're in specialist structures in Dubai and Abu Dhabi, I've been to visit them and they are all well, there's no serious cases," he said. "I also saw the Russian because I was with my fellow ambassador. We have full trust in the sanitary procedures being followed.

"The cases were concentrated in the team hotel and the risks of the case were managed very differently compared to the hotel that hosted the staff and media. There were no positive cases there, all the tests were always negative.

"The riders and staff of the four teams will undergo further tests to exclude they are positive: they came into contact with the first two cases and need detailed testing. They will stay in the hotel for 14 days, the usual period of quarantine."