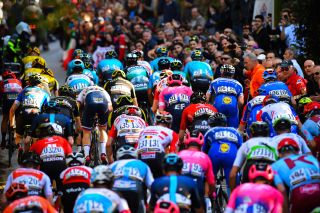 Fourteen doctors from professional cycling teams have written to race organisers ASO and RCS Sport, and the UCI, requesting the cancellation of upcoming races such as Strade Bianche and Paris-Nice due to the developing coronavirus outbreak.

On Wednesday, the doctors, representing a total of 11 teams, penned the letter in which they criticsed ASO and RCS for a lack of a 'robust plan' when it comes to addressing concerns about the spread of the covid-19 virus.

The letter, obtained by Cyclingnews, outlines four areas of concern: the lack of protocols in place to safeguard against the spread; the lack of diagnostic guidelines; the lack of resources in overburdened medical facilities; and the knock-on effects of any quarantine periods.

"We have seen no evidence from RCS or ASO that there are robust plans in place to address the foreseeable concerns and inevitable problematic situations," the doctors write, before calling for the cancellation of the two organisations’ races this month.

"We, the Heads of Medicine for our respective teams, respectfully request the cancellation of Strade Bianche, Tirreno-Adriatico, and Milan-San Remo. The same consideration should be taken with Paris-Nice, unless there is a strong and actionable plan in place," reads the letter.

RCS Sport are due to organise the Strade Bianche men's and women's races on Saturday March 7, followed by Tirreno-Adriatico from March 11-17 and Milan-San Remo on March 21.

However more than 2,300 cases of the coronavirus have been confirmed in Italy, largely in the northern Lombardy, Veneto and Emilia Romagna regions, which is by far the worst country affected outside Asia.

RCS Sport are keen to organise the races but the Italian government is currently deciding on restrictions on sporting events, which could enforce their cancellation or postponement.

ASO runs Paris-Nice, scheduled for March 8-18 in France, where there are 250 cases of the corona virus. It stated earlier this week the race would be going ahead.

"It is the responsible thing to do, for our riders, our team staff, and the greater public health," the doctors write in their letter.

"With these races cancelled, it is our hope that time can be dedicated toward taking the appropriate steps to plan for future races. We want our teams to race! But we want that to happen in a safe and responsible manner. There is no evidence that the health environment around these Italian races is safe, and we feel it irresponsible to send our teams there at this time."

The letter appears to have originated from the EF Pro Cycling team. The lead signatory is their Head of Medicine, Kevin Sprouse, while three other doctors at the American team added their signatures. The other WorldTour teams represented are CCC, Sunweb, Israel Start-Up Nation, Jumbo-Visma, Cofidis, Lotto Soudal, and Movistar.

EF Pro Cycling have requested dispensation from the Italian races, which are obligatory as part of the WorldTour, while Jumbo-Visma have stated they're pulling out of Strade Bianche. Unaware their doctor was signing the letter, Lotto Soudal have since issued an announcement stating they wish for this month's races to go ahead.

Other teams are on standby, delaying travel to Italy ahead of Saturday's Strade Bianche until a final decision is made.

The four areas of concern

The letter opens by outlining cycling’s susceptibility to the spread of coronavirus, bringing together people from all over the world and taking place out in public across large areas.

"The health of riders, team staff, and the general public must be the priority," reads the first of the letter’s four points.

"Currently, there has been no communication of a protocol which will aim to safeguard this. Other sports are either cancelling events or allowing athletes to compete in empty stadiums. There is no excuse for placing our teams into a situation which may be dangerous to their health.

The letter cites advice from governmental health agencies advising against travel to Italy before stating: "Cycling should play no active role in the further spread of COVID-19. As of yet, we have seen no plan from RCS or ASO to address any of these concerns."

The second point draws on the "disastrous" situation at the UAE Tour, where the race was halted and riders and staff quarantined while they were tested for the virus. Some are still stuck there, with reports of 12 riders and staff positive for the virus according to La Gazzetta dello Sport.

"If races proceed in Italy or other countries with COVID-19 infections, we would require assurance of robust diagnostic capacity," say the doctors, who highlight the spring as a time when respiratory illness is common.

"When this happens, are they to be quarantined? Should the entire team be quarantined? If so, for how long? How will they be tested? It should be a requirement that we have the capability of quick and accurate testing for influenza, respiratory viruses, and COVID-19. We must know what pathogen is causing an illness. Obviously, we cannot simply wait days or weeks. The race would surely be paralyzed. To date, no plan for testing has been proposed."

The letter then points to the burden placed on medical facilities in the countries where the races are taking place, raising concerns about the quality of care for riders in the event of crashes.

"There must be a much more defined plan for hospital care than is usually the case at such races. This has not been communicated."

Finally, the doctors state that the possibility of a repeat of the situation in the UAE, where riders and teams end up quarantined in Italy or France, is 'very likely'.

"Such a scenario can derail a team’s spring ambitions and even impact preparation for races such as the Giro d’Italia or Tour de France."