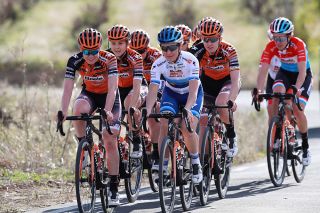 The UCI Women's WorldTeams and Continental Teams, which make up the new two-tiered system in professional women's cycling, are gathering at training camps ahead of the 2020 season.

There were some significant transfers and trades and so the main objective will be for the riders on each team to get acquainted with another, to distribute new clothing and gear, and to put in some long hours on the bike during team training sessions.

Cyclingnews will keep you up to date on the teams' camp dates and locations, along with news, features, rider interviews and the latest equipment, kit and gear that each team will be showcasing at the start of the season.

Meanwhile, teams like Boels Dolmans, Ceratizit-WNT, Bigla, Parkhotel Valkenburg, Rally UHC and Tibco-SVB, among many others, will remain part of the second-tier Continental Teams.

Trek-Segafredo were the first of the Women's WorldTeams to unveil the new jersey for the 2020 season. Lizzie Deignan showed off the new kit at the Rouleur Classic in London in October.

Trek-Segafredo women's jersey is similar to this year's version, keeping its blue hues. A panel across the top torso that showcase the title sponsors is dark blue. The bottom section is a criss-cross of various shades of blue from light to dark. The jersey keeps the white sleeves with dark blue stripes on the cuffs. The collar is now dark blue instead of white.

Some of the riders travelled to the Trek headquarters in Wisconsin, but the entire team reunited at a first official training camp from December 9-16 in Syracuse, Italy.

The men's and women's team combined blocks of hours in the saddle with massage, bike fitting sessions, base testing planning and preparation for the rapidly approaching 2020 season.

Ale BTC Ljubljana will be an exciting team to watch on the WorldTour in 2020. The team formed following the merger of teams Ale Cipollini and BTC City Ljubljana.

They signed proven sprinter and Italian road champion Marta Bastianelli to the team after her previous team Virtu Cycling folded last year. Bastianelli is a former road race world champion and she won the Tour of Flanders in 2019.

Alé BTC Ljubljana revealed their new yellow and orange kit at a team presentation in December. The riders next met at a team training camp beginning on December 12 through December 19 in Spain.

Canyon-SRAM brought their riders together for an opening team training camp from December 4-16 in Malaga, Spain. The team announced that they re-signed 15 riders from last year, and the newest Zwift Academy winner.

The team also announced that they hired former Dimension Data director Rolf Aldag in 2020. Aldag will direct the women's team as it embarks on its first season as a WorldTeam.

Canyon-SRAM revealed a new and even more lively kit ahead of the 2020 season. Rapha has added bright yellow to go along with the existing shades of purples, turquoises, blues, oranges and reds splashed across the dark purple and black background.

CCC-Liv will once again be led by Women's WorldTour winner and multi-time world champion Marianne Vos. The team will step away from a Dutch registration, and instead register as a Polish team in 2020. The move brings the team closer to its co-title sponsor CCC, which is footwear company based in Poland.

The team united for an opening training camp from December 9-19 in Denia and again from February 15-24 in Calpe.

They announced during camp that they hired Sofia Bertizzolo to the team for the 2020 season.

FDJ Nouvelle-Aquitaine Futuroscope will make the jump up to WorldTeam status in 2020. They are set to make an impact after signing the versatile Cecilie Uttrup Ludwig, who is a contender in both the Spring Classics and summer stage races like the Giro Rosa.

The team met for an opening training camp from December 9-15 at the Cambrils Park Resort in Spain, where Uttrup Ludwig showed off her new team jersey for the first time.

Mitchelton-Scott brought their women's and men's teams together for an end-of-season training camp in the fall of 2019. New riders joined the team for a chance to meet their teammates and staff members.

The women's team will focus on the Australian block of racing in January and February before returning to Europe to start the season.

Movistar Team Women will embark on their third season co-existing alongside the men's WorldTour programme. In 2020, they will also make the step up to the top tier of women's racing after the UCI approved their licence to become a WorldTeam.

The team will keep a core of their riders such as Spanish riders Eider Merino and Alba Teruel, along with French talent Aude Biannic, who extended their contracts with the squad into 2020.

The team announced that it had signed Italian Sofia Bertizzolo, however, legal constraints due to employment laws in Italy and Spain prohibited her from racing with Movistar.

Movistar revealed their 2020 kit at a team presentation in Madrid on December 19.

Sunweb launched their women's and men's WorldTour teams along with their development roster in a team launch held in Amsterdam in December. The team unveiled the full rosters and the new kit that will be worn during the 2020 season.

The jersey will stay the same red and black colours for the new season, with what they describe as the 'Keep Challenging' stripes.

Cyclingnews attended the camp and spoke with Coryn Rivera about her goals for the 2020 Spring Classics.

The women's team then met for a training camp in Calpe that begins on December 11.

Boels Dolmans once again ended the season as the top ranked women's team in the world, but was denied its application to become a top-level WorldTeam in 2020.

Team manager Danny Stam told Cyclingnews that the UCI denied his application because the team could not offer a four-year sponsorship guarantee. Boels Rental and Dolmans will end sponsorship of the team in 2020 but Stam says he will find a new sponsors and that he intends to continue to build the program.

The full Boels Dolmans team then met for a team training camp from December 8-18 in Spain where they revealed a new orange and black 'abstract motif' jersey for 2020.

Lotto Soudal Ladies revealed a brand new kit design for the 2020 season. Both men's and women's team will, once again, wear a similar jersey design but this year's edition will feature a new black panel across the arms and upper chest.

Rally UHC Cycling gathered in Minnesota in early December for their first get together of the team's 2020 rosters, culminating with two team presentations of the men's and women's teams.

The team's major sponsors are headquartered in Minneapolis, and the program run by Circuit Sports presented the team to the United Health Group in the afternoon at the Optum headquarters building in Eden Prairie, and then again in the evening at the Rally HQ in downtown Minneapolis.

The women's team will united at a training camp in Oxnard, California in January before beginning the racing season in Australia.

WNT-Rotor Cycling Team announced in December that Ceratizit Group will replace Rotor as the co-title sponsor of the team in 2020. Ceratizit is the parent company of WNT and the two sponsors will provide the financial backing of the newly named Ceratizit-WNT Pro Cycling team as it heads into its fifth season competing in women's professional cycling

Parkhotel Valkenburg revealed a new team kit in December that keeps its traditional Salmon-pink/peach tones but moves to an all-white background. The new design showcases a chevron-style graphic across the torso that are shades of peach and the jersey includes turquoise/peach along the sleeve cuffs, and turquoise and black along the base of the jersey.

The team is home to the number one ranked rider in the world, Lorena Wiebes. After a highly publicised contract dispute, she will continue to race with the second-tier programme until the transfer window opens in June.

Team Tibco-Silicon Valley Bank is the longest-running professional women’s cycling team in North America. 2020 marks the 15th year title of title sponsorship by Tibco Software Inc. The team originated out of the Palo Alto Bicycles women’s team in 2004. Tibco Software became a title sponsor for 2006 and Silicon Valley Bank for 2007. For 2020, the team will compete in the UCI North American calendar and will also continue its international racing calendar.

"2020 marks a milestone for our Team” said Linda Jackson, Founder of Team Tibco Silicon Valley Bank. "We have been title sponsored by Tibco Software for 15 years now and have been working with Silicon Valley Bank for 14 years. I am delighted to be adding Cannondale and Shimano as partners. We are building our team up for World Tour licensing, and partnering with these two companies is a huge step forward."

Team Tibco-SVB’s new Voler Apparel team kit will be in action at the Santos Women's Tour Down Under.