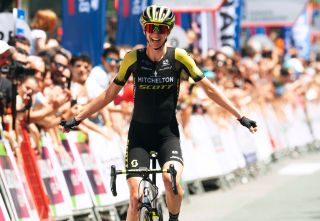 Mitchelton-Scott announced Wednesday that they have renewed Lucy Kennedy's contract for 2020. The Australian will bring confidence into the news season after breakout performances that saw her win three races.

"I feel like this year I have made a lot of progress and I am satisfied with the season but I definitely still want more," Kennedy said in a team press release. "I feel like I'm in a good place to really step up again and help the team even more and start next year on a really positive note and try to keep it going."

Kennedy joined Mitchelton-Scott in at the start of the 2018, but a combination of illness and injury caused setbacks in her performances. She started this year securing second overall at the Santos Women's Tour and then an overall victory at the Herald Sun Tour, which set the tone for a successful season.

She went on to win Durango Durango Emakumeen Saria, was second in a stage at the Giro Rosa, and then she won the inaugural Donostia San Sebastian Klasikoa.

"I think I have shown that when I am given the opportunities I can perform," Kennedy said. "Both roles are awesome, it is also an honour and a privilege to ride for riders like Annemiek [van Vleuten] and Amanda [Spratt] and I relish that role. Because of these riders we have in the team, it always feels like a special opportunity to be given a chance and I really appreciate that.

"I can't believe how strong the team will be next year, particularly in the hard hilly races. This year when I was put to work, it was often early so then maybe I wasn't there later in the race and I think next year we will be able to share that working role and have more numbers in the finals."

Mitchelton-Scott have not announced their full roster for 2020, but Kennedy joins returning rider and new world champion Annemiek van Vleuten, who had an existing contract through next year. The team also announced signing new riders Janneke Ensing from WNT-Rotor and Sofie de Vuyst from Parkhotel Valkenburg.