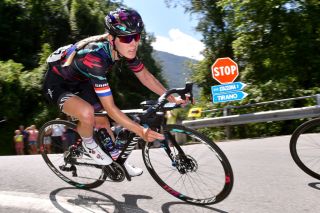 Canyon-SRAM announced Saturday through its social media channels that Hannah Barnes and Tiffany Cromwell will continue racing with the programme through 2020. They are both veteran riders of the team having signed on board in 2016 and will be targeting the Tokyo Olympic Games.

"I signed a three-year contract with the team in 2017 and it was an easy decision to make; the support from our partners continues to be incredible and I'm looking forward to the coming year, an olympic year, with them and with the team," Barnes said.

Barnes had spent two years with the American team UnitedHealthcare before moving over the Canyon-SRAM in its first year under new title sponsorship. She has had much success with the team having won the British national title (2016), a stage of the Giro Rosa (2017), and two stages and the overall title at the Setmana Ciclista Valenciana (2018). She was also part of the Canyon-SRAM team that won the team time trial world title in Innsbruck in 2019.

Barnes is aiming to make the team selection for the Tokyo Olympic Games in July where she will likely play a key support role for Lizzie Deignan.

Although she joined Canyon-SRAM in 2016, Cromwell was also part of the existing programs Specialized-lululemon and Velocio-SRAM. She is a former winner of Omloop Het Nieuwsblad and has placed on the podium at GP Plouay, Sparkassen Giro, and was fifth at the 2014 UCI Road World Championships.

At Canyon-SRAM, Cromwell is often a mentor to the younger riders and an on-road captain. She is a versatile rider who competes in one-day and stage races but has a passion for the spring Classics.

"Why change a good thing?! I also have had a 3yr contract with the team since 2018. We have amazing partners who I love working with, the girls are a great group, I’m well supported, and am continually challenged to improve on and off the bike," Cromwell said.