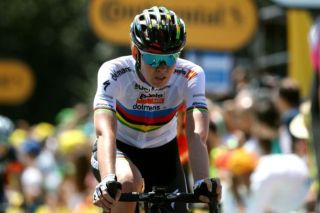 FDJ to apply for Women's WorldTeam status in 2020

Boels Dolmans are not among the eight teams who have submitted applications for Women’s WorldTour licences as part of the new two-tiered system that will come into force from 2020.

Trek-Segafredo, Canyon-SRAM, Mitchelton-Scott, CCC-Liv, Movistar, Team Sunweb, Ale-Cipollini, and FDJ have all formally submitted the paperwork required to be considered for top-tier status by the UCI.

However, the number-one ranked team, according to both the UCI WorldRanking and UCI Women’s WorldTour ranking, will not be part of the top level of the sport from next year. Similarly, WNT-Rotor, who had announced their intentions to go for a WorldTour licence, are not among the applicants.

The Women’s WorldTour has existed as a race category for a number of years but until now teams have not been divided into categories like in men’s professional cycling. As part of a range of reforms to women’s cycling under UCI President David Lappartient, women’s teams from 2020 will either be ‘UCI Women’s WorldTeams’ or ‘UCI Women’s Continental teams’.

The WorldTour tier will be made up of a maximum of eight teams in 2020, meaning all eight who have applied will receive licences, provided they meet the governing body’s ‘sporting, ethical, financial and administrative criteria’.

The teams will receive five-year licences, running from 2020 to 2024, with new teams able to join in subsequent years until a maximum of 15 WorldTeams is reached in 2024. From that point on, licences will be awarded based on raking points.

"The UCI is pleased with the number of applications received, which is a sign of the vitality and professionalism of women’s cycling," read a statement from the governing body on Wednesday.

Indeed, Lappartient had set a figure of five top-tier teams when he outlined plans for the Women’s WorldTour to Cyclingnews nearly 12 months ago. However, the absence of Boels Dolmans, the leading team and home to world champion Anna van der Breggen, raises questions.

Team manager Danny Stam had previously voiced his concern over the UCI’s reforms of women’s cycling. As well as the two-tier team system, there will be a new structure of race categories, a minimum salary, and a number of contract requirements, such as provisions for maternity cover and health insurance.

"We very much support further professionalisation of the sport. However, it's very important that a new category will be added under the Women's WorldTour so that the progress is incremental," Stam told Cyclingnews late last year. "The minimum salary requirement isn't the problem, but there are a lot of additional costs that add up to quite a big amount of money that a team needs to have in order to set up a professional women's team."

Trek-Segafredo’s general manager Luca Guercilena said his team had no problems meeting the heightened financial demands, with the benefit of being able to share the existing infrastructure from the men’s WorldTour team. Indeed, of the eight applicants for the licences, six are part of existing men’s WorldTour structures, Canyon-SRAM and Ale-Cipollini being the exceptions.

A final decision on which teams have received Women’s WorldTour licences will be announced in December.