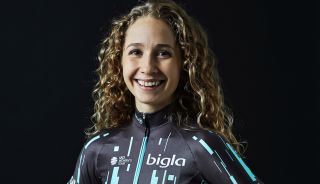 Cecilie Uttrup Ludwig showed off her new FDJ Nouvelle-Aquitaine Futuroscope on social media Wednesday. The Danish all-rounder has united with her new team at a training camp in Spain.

FDJ Nouvelle-Aquitaine Futuroscope will make the jump up to WorldTeam status in 2020.

The UCI announced six other teams that will form the new top-tier of women's professional cycling next year including Canyon-SRAM, Alé BTC Ljubljana, CCC-Liv, Movistar Team Women, Team Sunweb and Trek-Segafredo. Absent from the list of top-tier teams was Mitchelton-Scott. The team's licence is pending approval after further evaluation by the UCI.

FDJ are set to make an impact after signing the versatile Uttrup Ludwig, who is a contender in both the Spring Classics and summer stage races like the Giro Rosa.

UCI confirms seven of the eight Women's WorldTeams for 2020

Uttrup Ludwig: There's a fire inside that drives me to win

She has a string of impressive results to her name in 2019, including a win at the GP de Plumelec-Morbihan Dames. She also secured podium positions at the Trofeo Binda, the Tour of Flanders and La Course by Le Tour de France.

FDJ Nouvelle-Aquitaine Futuroscope are currently at an opening training camp from December 9-15 at the Cambrils Park Resort in Spain.

A new adventure has officially begun with @FDJ_NAqui_Fut 🤩✨ Training camp is in full swing🔥💪🏻 Pedalling fast, having a blast😂😜🥳Credit to @ThomasMaheux for the cool 📸👏🏻 pic.twitter.com/mVxjhTpxOjDecember 11, 2019