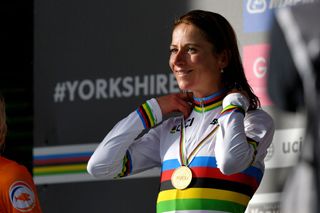 World champion Annemiek van Vleuten (Mitchelton-Scott) has just barely settled into her new rainbow jersey but is already planning ahead for a successful 2020 racing campaign that will target the spring Classics, Olympic Games and the World Championships.

Van Vleuten’s preparations for next season will begin in November, after a well-deserved holiday, with an opening training camp in Colombia.

"Colombia is at altitude but the main thing is that I don’t want to train in November in the Netherlands because the weather is so bad," Van Vleuten told Cyclingnews in a phone interview while on her way to compete at the Kiremko Nacht van Woerden cyclo-cross race.

"I’m an adventurous rider; I like to go to different places, meet new people and see different cultures. I’ll be training to stay fit but also to enjoy Colombia and get to know new people."

While in Colombia, Van Vleuten will participate in a newly established event called the Car Bike Classic. The three-day ride is held from November 29 to December 1 and organised by fellow professional cyclist Diana Peñuela (Ale Cipollini).

"It’s very exciting," Van Vleuten said of her upcoming trip to Colombia. "Diana Peñuela is from Colombia and I’ve been in contact with her. I know her because at the World Championships in 2017 we swapped [national team] jerseys. I really wanted to have a Colombia jersey. She invited me to visit Colombia and she’s taking care of all the details – the places we will ride and stay."

Van Vleuten normally trains at altitude in the Italian Dolomites and Tenerife, Spain, during the season. She had intended to travel to Colombia for an altitude training camp last year to try something new. However, she was forced to cancel such plans after suffering a serious knee injury at the World Championships in Innsbruck. She had been invited by her Mitchelton-Scott teammate Esteban Chaves, who at the time suggested some of the best places to train.

"I have a little bit of contact with Esteban, so maybe we will go to where he suggested last year, where a lot of pros stay. I watched a television show that took place in Colombia last year and the country looked so amazing.

"You can always go to Calpe, again, but a lot of cyclists like to go to the same places and same hotels because they know what to expect. I like getting out of my comfort zone," she said.

A trip to Colombia isn’t the only change that Van Vleuten has made to her 'off-season' programme in an effort to keep her career as a professional cyclist fresh. She has also been racing cyclo-cross this fall, beginning at the Superprestige in Gieten.

"I got invited to compete in cyclo-cross and I like it. It’s not a goal, though, and I was laughing when they said I was one of the favourites ahead of Gieten.

"I let everyone go into the field first before I even started," Van Vleuten laughed.

"I have no ambitions for cyclo-cross other than the technical challenge and to be able to get better technically upon each lap. I’m not training for it. It’s just to have a little bit of fun. I will only do three races and all are held on technical courses where you need to walk a lot or get off the bike… That’s not my thing."

Van Vleuten’s effort to add rest along with new challenges and experiences to her off-season programme will be important when it comes to maintaining focus and motivation during the long 2020 campaign.

Van Vleuten said that she is not certain of her complete 2020 road race schedule, including her participation at the Giro Rosa. She hasn't yet planned out the other events that she will participate in outside of the three main goals: the Tour of Flanders and the Ardennes Classics in April, Olympic Games in July, and the World Championships in September on a mountainous route in Switzerland.

Van Vleuten's full race schedule will be decided upon ahead of next season.

"I will start with my first block: Strade Bianche, the Tour of Flanders and the Ardennes," Van Vleuten said. "After Liège-Bastogne-Liège, I'll regroup with my team and coach and prepare for my path to the Olympics. The World Championships also look very interesting next year. When the UCI announced the location and course, I was really happy to see it."

Van Vleuten had an outstanding season with victories at Strade Bianche, Liège-Bastogne-Liège and a string of second places at Amstel Gold Race, Flèche Wallonne and the Tour of Flanders.

She went on to win her second consecutive Giro Rosa and then culminated her successful season with a victory in the road race at the UCI Road World Championships in Yorkshire in September.

"It’s special," Van Vleuten said of her audacious 104km solo attack that led to her victory in the road race in Yorkshire. "Sometimes I have to go back and watch the video footage of the race to see how I did it. It’s very special."

Van Vleuten was leading the Women’s WorldTour heading into the final round at the Tour of Guangxi on Tuesday, but chose not to compete in the one-day race. She was only leading Marianne Vos (CCC-Liv) by five points in the series classification. Vos placed third in the race and won the series title, while Van Vleuten slipped to second and Lorena Wiebes (Parkhotel Valkenburg) finished third overall.

"Marianne showed that she is back on a great level and she won a lot of races," Van Vleuten said of her compatriot. "In the end, if you want to go for the series title, you have to win a lot of races. Congratulations to Marianne for having a great season."

Winning the elite women’s road race world title was one of Van Vleuten’s biggest career accomplishments and she said she’s looking forward to wearing the rainbow jersey throughout the 2020 season.

Although the Olympic Games will be an important event next year, Van Vleuten stressed that it is not the only defining moment of a cyclist’s career.

"I think it’s a beautiful goal," she said. "Sometimes you need to wake people up a little bit, though. There’s more to life, especially in cycling, than the Olympics.

"Winning the World Championships and wearing the rainbow jersey for the whole year is very special for me.

"There are so many nice races during the year, too, and so focusing only on the Olympics is not the best approach for me," she said.