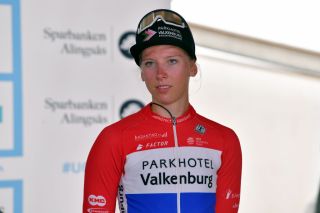 Lorena Wiebes and Parkhotel Valkenburg have reached a settlement in their contract dispute which will see the number one ranked rider in the world temporarily stay with the Dutch team and avoid a court proceeding that was scheduled for Thursday in Alkmaar.

According to the Dutch press outlet De Limburger on Wednesday, the details of the settlement are confidential, but title sponsorship owner Jos van de Mortel said the agreement satisfies neither party involved in the dispute.

"We have reached an agreement that will not satisfy anyone. But solved is solved,"  Van de Mortel said.

Wiebes confirmed to RTV Utrecht that her management team and Parkhotel Valkenburg met on Tuesday to discuss the dispute and that they came to an agreement.

"There was a conversation yesterday between my camp and Parkhotel Valkenburg, but I was unable to attend because I am in training camp in Gran Canaria. I do not know exactly what was said, but they have come to a solution there. That is nice, because we were both not waiting for a lawsuit," Wiebes said.

"It is not the most ideal situation, because I would rather have seen it differently. I always said that I have nothing against the girls of Parkhotel Valkenburg.

"My ambitions and especially my vision clashed very much with the management of the Parkhotel team. We have now found certain solutions, for the first half year, and made agreements that I am as little as possible bothered by the management around me," Wiebes said.

Last year, Wiebes won 15 races, including all three stages and the overall classification at the Tour of Chongming Island, the RideLondon Classique, two stages at the Boels Ladies Tour and the Dutch road race championships. She ended the year as the number one rider in the UCI World Rankings.

She had hoped to reach an agreement with Parkhotel Valkenburg, or at least some clarity, about her contract situation for the 2020 season before January 1. She told NOS that if she didn't get out of her contract by that date, she might not compete at all until the transfer window opens on June 1, 2020.

Parkhotel Valkenburg responded by bringing the case to court, accusing Wiebes of breach of contract with the case due to be submitted to the court in Alkmaar on Thursday. In addition, the UCI confirmed to NOS that Wiebes wouldn't be able to sign with a new team at this time because the contract deadline was November 1, 2019. She must now wait until the transfer window in June.

The settlement between Wiebes and Parkhotel Valkenburg means that she will continue to race for the Dutch team "for the time being", and that her contract has been revised, according to the De Limburger.

"See it as a temporary agreement. For the time being she is racing for us, but there may come a time when she will change team," Van de Mortel said. "Her contract is being broken open and a new settlement agreement is now being worked on.

"I now assume that she will ride the spring races in our jersey and on our bikes," said Van de Mortel.

Wiebes' manager André Boskamp told De Limburger that both parties made an effort to settle the dispute amicably. "We are largely out of it, now it is all about the subtleties," Boskamp said. "I want to prevent an interim injunction from appearing on Wiebes' CV."

Since the two parties have reached an agreement, Parkhotel Valkenburg's court proceedings against Wiebes have ended. "Nobody wants to make this a dragging process," Van de Mortel said.