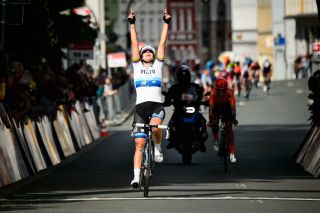 Italian road champion Marta Bastianelli will return to the Italian Alé team after spending 2019 with Bjarne Riis' Danish Team Virtu squad that will fold at the end of the season. Re-signing the sprinter is part of the team's push to make the Women's WorldTour next year.

Formerly racing as Alé Cipollini, the Italian UCI team recently announced adding BTC City Ljubljana as a naming sponsor as well as the addition of Spanish rider Mavi Garcia from Movistar to the 2020 roster.

"I have had various offers for the season 2020, but when [Alé BTC City Ljubljana team president] Alessia Piccolo and Alé contacted me to come back, I couldn't say no," Bastianelli said in a statement released by the team.

Bastianelli, who is a favourite for this weekend's UCI Road World Championships Elite Women's Road Race, rode with Alé Cipollini for three seasons before signing with Team Virtu, taking 16 wins with the Italian team.

"This is a second family for me. I've found a deal that I will define better after the Worlds Championships, when the UCI will confirm what they promised, to accept the team's status in the Women's WorldTour."

The 32-year-old speedster flourished in 2019 with team Virtu, starting her season with wins in the Belgian and French one-day classics, then following those victories with two stages and the overall at Gracia-Orlova in Russia. She won a stage at the Lotto Thüringen Ladies Tour, then took the Italian road race title before finishing her season with wins at Postnord Vårgårda and a stage of de l'Ardèche in France.

"We are very proud to have Marta back with us in the 2020 team," Piccolo said. "It's a very warm comeback and we feel happy to have the Italian National Champion in the one and only Italian team in the Women's WorldTour."