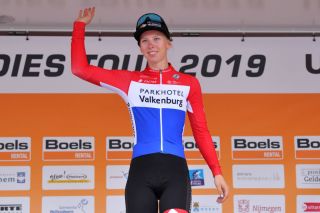 Lorena Wiebes is hoping to reach an agreement, or at least some clarity, about her contract situation for the 2020 season before January 1. The number one ranked rider in the world would like to race for a top-tier women's team next year but is currently under contract with second-tier team Parkhotel Valkenburg.

"I would like to go one step higher and there have also been discussions with Parkhotel," Wiebes told Nos. "That has lasted so long that the relationship with the team's management has been broken in such a way that I no longer want to ride for that team.

"I prefer clarity before 1 January."

Wiebes joined Parkhotel Valkenburg in 2018 and she is reportedly contracted with the team through the end of 2021.

She has had an outstanding 2019 season with 15 wins, which have included all three stages and the overall classification at the Tour of Chongming Island, the RideLondon Classique, two stages at the Boels Ladies Tour and the Dutch road race championships.

According to the cycling website Wielerverhaal.com in November, Wiebes had offers for the 2020 season from three of the world's biggest teams; CCC-Liv, Sunweb and Trek-Segafredo, and was looking for a way out of her contract with Parkhotel Valkenburg.

Women's racing will see a marked changed in 2020 with the introduction of the new two-tiered system and a new racing structure. The UCI announced eight teams that will be among the highest level of racing; Alé BTC Ljubljana, Canyon-SRAM Racing, CCC-Liv, FDJ Nouvelle-Aquitaine Futuroscope, Mitchelton-Scott, Movistar Team Women, Team Sunweb and Trek-Segafredo.

Wiebes told Nos that if she does not get out of her contract with Parkhotel Valkenburg by January 1, she might not compete at all until the transfer window opens on June 1, 2020.

"So there are two options for me: either not [race] for half a year or still transferring to another team," Wiebes said.

"So there is a good chance that I will no longer cycle because I no longer want to ride for Parkhotel. It has now taken so long that I have moved on.

"Maybe I'll go kickboxing then. I like that too."

"The intention is that I will come back in June. Whether I already have another team? I could sign with a team, but we will see what that is," she told Nos.

Wiebes said that she was grateful to her Parkhotel Valkenburg teammates and staff who have supported her cycling career up to this point but that she wants to take the next step in her career and move up to the top-tier of women's teams.

"It is very unfortunate it had to come to this situation between me and Parkhotel Valkenburg," Wiebes wrote in a post on social media last month.

"Looking forward to next season. I think the pressure on my teammates will only get higher after the success of 2019 and the focus of developing young talents will get lost in the pressure of getting results."

Parkhotel Valkenburg manager Esra Tromp said that it's disappointing that the working relationship between Wiebes and team management has soured but that they still have 'faith' in working with her during 2020.

"After a very successful year, and a contract extension with Wiebes, we have made investments towards the new season," Tromp told Nos. "The fact that this has now been changed last minute is something that we need to think carefully about and not just give up. It is important that the whole team can build on the contracts that are concluded.

"After such a super season we still have a lot of faith in working with Lorena. That it is not mutual is very disappointing."