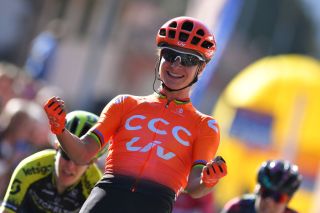 Marianne Vos agrees with the sport governing body's new two-tier team system whereby only teams that can provide a four-year sponsorship guarantee and meet the financial requirements will be permitted a WorldTeam licence in 2020.

Vos' CCC-Liv team is one of eight teams that have applied to be part of the top-tier of women's racing in 2020.

"It's important [to have a four-year sponsorship guarantee]," Vos told Cyclingnews at the World Championships in Yorkshire at the end of September.

"I also know that it's not easy for some teams to get a four-year stable contract [with sponsors] and to know that everything is financially supported.

"It's difficult for teams, but on the other hand, it's good to have this base to build and to have a more steady economic structure in cycling."

UCI president David Lappartient initially aimed for five WorldTeams in the first year (2020), and increase to 15 teams by 2022.

Lappartient also said that if more teams could meet the increased financial requirements that include a minimum salary and social insurances and benefits, the UCI would accept more than five teams in the first year.

Expectations were surpassed when the UCI announced the eight teams that applied for a WorldTeam licence in 2020: Trek-Segafredo, Canyon-SRAM, Mitchelton-Scott, CCC-Liv, Movistar, Team Sunweb, Ale-Cipollini, and FDJ Nouvelle-Aquitaine Futuroscope.

WNT-Rotor said they had applied for a licence but were not among the applicants on the UCI's list.

The number one ranked women's team in the world, Boels-Dolmans, was also not among the eight applicants. Cyclingnews spoke with team manager Danny Stam in Yorkshire, who said that his application for a WorldTeam licence was declined. He said the team couldn't provide a four-year sponsorship guarantee given that title sponsors Boels Rental and Dolmans are ending their contracts with the team in 2020.

"In the first meeting, we applied for the WorldTour, but we came across the rule that you need to apply for a four-year licence," Stam told Cyclingnews in Yorkshire. "We had a very short decision to make. They said we needed to have a four-year future [guarantee] or else we could not apply for the WorldTour."

Stam said that not having a WorldTeam licence in the first year of the reforms would not affect his team. He said that the teams that have a top-tier licence would be automatically invited to the Women's WorldTour events. The next teams invited to compete in the top-level races will be the highest-ranked Continental Teams, where he expects Boels Dolmans will to be top of the list.

Cyclingnews asked Stam if he felt the four-year guarantee would be too difficult for women's teams to meet, but he said, "No."

Like Vos, he believes that forcing teams to meet a four-year sponsorship guarantee requirement will provide more stability and security for women in the sport.

"I agree with the four-year guarantee because it will help women's teams provide longer support, a bigger future," Stam said.

Vos is contracted to race with CCC-Liv through 2020. She recently secured the overall title of the 2019 Women's WorldTour after an outstanding season saw her win Trofeo Alfredo Binda, four stages at the Giro Rosa, La Course by Le Tour de France, and Ladies Tour of Norway.

Teams often rely on signing big-name riders, like Vos, to secure title sponsorship funding each year. However, Vos said that the new four-year sponsorship guarantee means that a team's future will no longer depend as much on a handful of riders' results.

"I have a license to compete with the team until the end of 2020," Vos told Cyclingnews. "CCC-Liv's licence doesn't depend on my contract to continue, and of course, that's nice."

Vos has had one of the best seasons since 2014. She's looking forward to next year where her primary focus will be on the Olympic Games in Tokyo, after which she will decide her future in cycling.

"I'm focusing on Tokyo 2020, and after that, I don't know. With my shape, I'm definitely not done with the sport, but I also don't like to look further ahead."