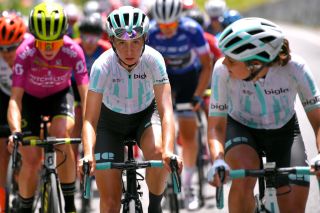 FDJ Nouvelle Acquitaine-Futuroscope have announced the signing of Cecilie Uttrup Ludwig for the 2020 season, with the Dane joining after spending three years at Bigla Pro Cycling.

Uttrup Ludwig has a string of impressive results to her name in 2019, including a win at the GP de Plumelec-Morbihan Dames. She also scored podium positions at the Trofeo Binda, the Tour of Flanders and La Course by Le Tour de France.

Her signing significantly boosts an FDJ squad that grabbed two wins during the season: at the French National Championships road race and at August's La Périgord Ladies. The team is among eight to apply for five Women's WorldTour spots for 2020 but currently lies 15th in the WWT rankings, below the other seven applicants.

"I'm thrilled to join the team next year," said Utttrup Ludwig in a team statement. "I'm really looking forward to be a part of this ambitious project with the application for a WorldTour licence.

"I genuinely believe that I'll have the best possibilities to take the next step in my development as a cyclist. I'm overwhelmed by the great trust the team has in me, and I truly believe that we can achieve fantastic things together. Bring on 2020!"

The 24-year-old joins fellow Scandinavians Emilia Fahlin and Stine Borgli at FDJ next season, and should immediately come on board as a team leader, given her palmarès.

"It's of great pride for us that Cecilie joins our team," said FDJ general manager Stephen Delcourt. "We are ambitious for the next seasons, and we want to establish ourselves as one of the best teams in the world, while keeping our values that since 2006 have built our successes: putting the human at the heart of each project.

"Cecilie is not only one of the best cyclists in the world, she is a woman who, through her charisma and joie de vivre, makes fans around the world dream. Her talent is immense and, surrounded by a complete and homogeneous team, we can accompany her in this progression," he said.

"2020 marks a new direction for our team due to our candidacy for the new Women's World Tour, but also by us having a more international, 100% professional team with the desire to show our colours at each competition."

FDJ also last week announced the arrival of Australian rider Brodie Chapman for 2020. The 28-year-old arrives from US team Tibco-Silicon Valley Bank, with whom she this year won two stages and the overall title at the Tour of the Gila in New Mexico in May.